Four Seasons has recently announced that it will be opening a new resort community at Disney World. Planned to open in 2014, the Four Seasons Resort Orlando at Walt Disney will include a 444-room hotel, 40 residence club units and up to 90 private residences. The new development will be an enclave within the existing Golden Oak residential community which was created and master-planned by Disney. 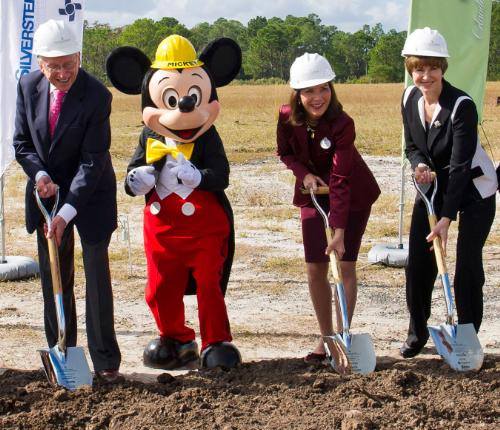 In keeping with the luxury residential community's upscale standards, the new resort will feature a rooftop restaurant that offers views of the Magic Kingdom. In addition, a 14,000 square foot spa, three pools, a lazy river, tennis courts, a basketball court and climbing wall will be some of the resort's amenities. Also planned for renovation is the existing Tom Fazio-designed Osprey Ridge 18-hole championship golf course. When completed, Four Seasons will also take over the course's management. Two recreational centers, approximately 37,750 square feet of meeting and event space, and a business centre will round out the resort's facilities.

Meg is one of the people pictured above at the groundbreaking ceremony, that started construction of the new resort.