Formula 1 Driver Nick Heidfeld Signs Up With The Hideaways Club

The Lotus Renault Grand Prix driver joined The Hideaways Club in February 2008. He's just recently invested in the management company for the club and has agreed to become an Ambassador for The Hideaways Club. 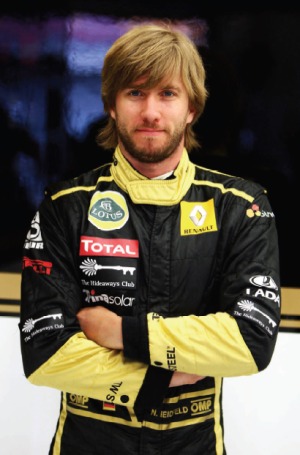 The 33 year old, currently in his 12th season of Formula 1, has gained a reputation as one of the fastest drivers in the sport, hence his nickname "Quick Nick". He has had a spectacular and unique career on the motor racing circuits of the world, achieving more than a dozen podium finishes, a pole position and two fastest laps in over 180 Grand Prix appearances. Nick Heidfeld was appointed to drive for the Lotus Renault GP Formula 1 team during the 2011 season. He has already achieved a podium finish by claiming third place at the Malaysia GP in April and is currently in 8th position with 34 points for the season.

Commenting on his investment Nick stated, "Having travelled the world so frequently, usually at high speed, I have often felt the need to have somewhere I can go and relax in between races and during my down time. However, I did not want all the hassle and added responsibility of owning my own home overseas, and to be committed to going to the same place year on year.

"In The Hideaways Club, I have found the perfect solution - a wide variety of beautiful properties in stunning locations around the world that I can use year-round, and benefit from the personal Concierge Services that make it so easy for my family and friends to have a relaxing time together. The whole concept of The Hideaways Club makes total sense to me, and I have enjoyed a number of brilliant holidays in their properties already".

"With each apartment having its own unique design flare, the new City Collection Fund is a really cool and innovative product and I can't wait to stay in as many of these properties as possible", he added.

"We were thrilled when we heard that Nick wanted to become an investor in the company having been a Member for some years," said Helmut Schön, Co-Founder of The Hideaways Club. "We feel he truly represents the spirit, drive and determination to be the best that is so much a byword in The Hideaways Club. We are going through a very exciting period of growth and expansion in the company and consider it an honour and a privilege to work with him, and for Nick to further endorse our products out of his own conviction".

Retired British tennis star Tim Henman is also a member and ambassador for The Hideaways Club. Several other destination clubs and vacation property funds have athletes or celebrities as members or ambassadors. Former Major League Baseball pitcher Dennis Rasmussen works with Equity Estates as a VP of Investor Relations. Golfer Annika Sorenstam is an ambassador for the Ritz-Carlton Destination Club and they work together on unique experiences for club members. Lifestyle Assets works with former European Tour and PGA Tour professional golfer David Feherty.