It seems that many of the destination clubs are out competing each other to offer joining incentives at the moment. 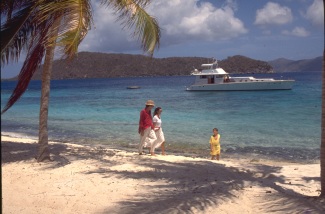 The current crop of offers includes:

Private Escapes: Offering a free, weeklong cruise aboard the companys jewel of the Caribbean: La Buscadora motor yacht (pictured right) in the British Virgin Islands. This is valued at $25,000 and includes the full service and amenities of the 80-foot yacht and her crew. It is being offered to 10 new members who join after 13th February.

Ultimate Resorts: Is adding 7 additional nights to the first years membership, for members who join by May 31st. Ultimate also offers American Express members double reward points when they use their card to pay the membership fee.

M Private Residences: Recently introduced new membership levels and during the launch of these new programs is offering an Explorers Round which focuses on an incentive for a limited number of Share sales up to March 31st, 2008. The incentives are C$4,000, C$8,000 and C$10,000 for each of their three main membership levels.

Distinctive Holiday Homes: Is offering to prepay a 2 year lease (10,000 miles per year) of a new BMW up to the value of your first years annual dues. This offer is available on the clubs 3 week, 4 week and 5 week membership plans for US residents who join before June 1, 2008.

Lusso: As we mentioned last week, Lusso is changing its membership plan on March 1st to remove the Membership Reward feature.

Exclusive Resorts: American Express cardmembers who join before March 31, 2008 can save up to $15,000 off the cost of membership.