Comments from Jim Tousignant and Rich Keith on Merging their Clubs

Following the merger announcement between Ultimate Resorts and Private Escapes we talked to Jim Tousignant and Rich Keith, the CEOs of the two clubs.

What made you decide to combine the clubs ?

"The principal driver is that this is a business that requires scale. The market requires a national and international reach and scalability is the engine. If we did not combine we would be competing for members and competing on media spend and branding. By combining our members have double the homes and we can focus out operation and systems."
"We started having initial discussions over a year ago. Both companies looked at acquiring Tanner & Haley and after Ultimate acquired T&H we started having more in depth discussions at the start of this year. So we've been working on this for 6 to 9 months now."

When can members make reservations and use properties ?

"The plan is that members will be able to make reservations across all properties in December for stays starting in the 1st quarter of 2008. The combined company will move to Private Escapes reservation platform (called "Escapes"), which will take a couple of months to add in the current Ultimate reservations and properties and so be ready for all members to use." 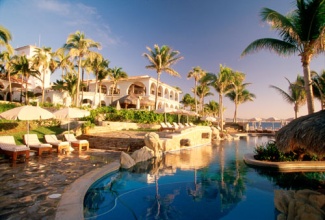 Does this impact the recent hotel partnership that Ultimate announced ?

"No, there's no effect and members can carry on making reservations and using the hotels as announced."

What should prospective members do over the next 60 to 75 days ?

"People should continue with their membership decision as if the two clubs were still separate, and join the club (Ultimate or Private Escapes) that is the best fit for them as if the clubs were separate. If a member has already joined or joins under a current membership plan (of either club) all the structures and terms of those membership plans will stay in effect (under the combined club), so that their terms will be grandfathered in to the combined club."

As part of the merger the clubs are working out what the new membership plans will be and what the impact will be on such things as reciprocity, where members in say the $2m club can use the $3m homes. Once the clubs have agreed on the terms and pricing of the new membership plans and these new plans have been announced, then new memberships will only be available under these new plans. Rich Keith stated that the new plans are expected to be 25% to 30% higher than the current plans - partly reflecting the increased attractiveness of having a larger choice of destinations.