Ultimate Escapes is gearing up for ski season. With the two new homes that it just opened in Steamboat Springs it has a total of 5 homes across the three different destination club levels. 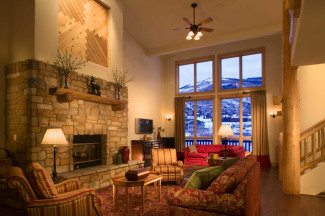 Steamboat Living Room
When Ultimate Escapes started back in 2005 (it was named Ultimate Resort at the time) one of its very first homes was in Steamboat Springs. The two new residences include one in the Elite level club (average value $3m homes). This provides 5 bedrooms, a loft, 5 and ½ baths and 3,300 square feet of living space. Each bedroom has its own private bathroom and is decorated with alpine themed furnishings and equipped with flat panel televisions, stereo speakers and ceiling fans. The great room and loft area are large spaces for relaxing around the fireplace, shooting pool or watching movies. The home is just steps from the Steamboat gondola and at the end of the day Ultimate members can relax in their own seven person Hot Springs Spa.

The Signature level club now has three homes in Steamboat and there is also one home in Ultimate Escapes Premiere level club (average value $1m homes). 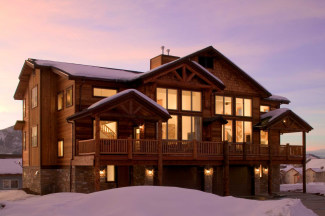 Steamboat Springs bills itself as Ski Town, U.S.A. and has produced more winter Olympians than any other town in North America, now a record 69 and counting. The annual snowfall is 331  thats nearly 28 feet of snow  on its nearly 3,000 skiable acres. The ski season this year runs from November 27, 2008 - April 12, 2009. There are direct flights into Steamboat/Hayden Airport, from 9 major cities including Atlanta, Chicago, Dallas, Denver, Houston, Minneapolis, Newark, New York, (LGA) and Salt Lake City. Alternatively its about a 3 hour drive northwest of Denver. Full travel details and more about the town are at steamboat.com

As you might imagine for a popular ski resort in Colorado, there are several other destination clubs and private residence clubs in Steamboat. You can see the list in our Steamboat Springs home listings.