This year VistaJet completed its transition to an all large cabin and long range fleet of Bombardier Challenger and Global jets. The company has seen impressive overall growth of 17% in flights, with flights in North America increasing by 159%.

When VistaJet began in 2004, the company started with LearJets, but the last of these smaller planes left the fleet earlier this year. As demand for long-range flights and premium large cabin aircraft grew, the company moved to using larger Bombardier planes. This summer the company took delivery of a Global 6000 aircraft, making the 50th plane in the fleet. As of June, this year their fleet consisted of 22 Global and 28 Challenger aircraft and has now grown further to 57 aircraft. This is the largest privately-owned fleet of Bombardier business aircraft worldwide. No aircraft is more than five years old, since the company has a policy of selling aircraft when they reach 4-5 years of age.

"Our growing business jet fleet demonstrates VistaJet's increasing global expansion," said Thomas Flohr, Founder and Chairman of VistaJet. "The Global 6000 aircraft continues to be a popular addition to our fleet, providing the comfort, technology and range that our customers rely on when flying with VistaJet. As our worldwide growth continues, we look forward to adding more Bombardier business aircraft to our fleet."

The smallest aircraft in the fleet is the super-midsize Challenger 350, which can carry eight passengers 3,200 nautical miles (5,926 km) non-stop. All the aircraft are equipped with high-speed wi-fi and an ipad-based entertainment systems and are provided with top quality mattresses and bedding for overnight flights. 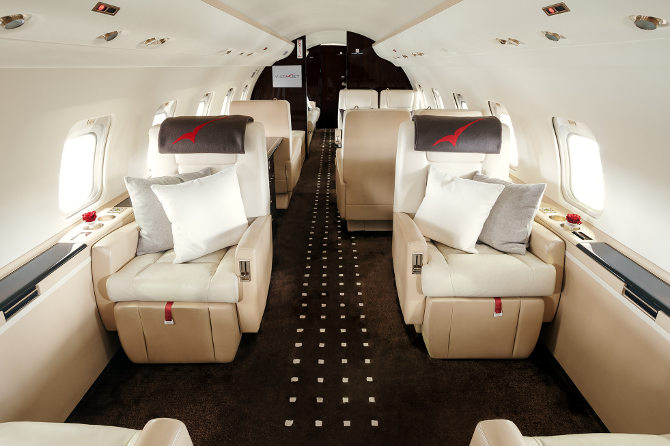 In 2013, VistaJet announced its US launch (the company now has a North American headquarters in New York). This year, they announced further expansion into China with their first Chinese registered aircraft, which will be available for domestic flights in China. They have already been flying in and out of China for many years. Flohr sees a huge potential for growth in the region, citing a 90% increase in flights from Oceania to Asia and a 50% increase in flights from North America to Asia.

VistaJet prices range from $12,000 per hour on the Challengers to about $16,000 per hour on the Globals. Flohr acknowledges that they are not for the budget-conscious traveler, nor do they intend to be. The company positions itself as providing a high-end experience, but with a simple business structure to the arrangement.