Commercial aviation is experiencing a dramatic drop in demand due to the coronavirus pandemic, and the ongoing uncertainty leaves many industry insiders wondering when things will get back to normal. This downturn has also carried over to manufacturers like Boeing, whose 777X long-haul jets are being delayed. But at the same time, private aviation companies are seeing an uptick in demand. One of these, VistaJet, recently took delivery of its first Bombardier Global 7500, the largest and longest range business jet in production. SherpaReport spoke to VistaJet’s Chief Commercial Officer Ian Moore about the company’s new fleet.

With a passenger capacity of up to 14 (or sleeping room for 8) and a flight range of 7,700 nautical miles, Moore describes the Bombardier Global 7500 as “a whole new category of aircraft.” Its flight time of 16 hours opens new possibilities for travel. It can cut a long journey time by up to 20% by removing the need to stop for refueling. VistaJet will have two Global 7500s by the end of 2020 and an eventual fleet of six, with the potential to add more as demand dictates. The move places VistaJet as the first company to offer shared usage of an ultra-long-range plane. The first one is already in service for regular travel between Asia and North America. 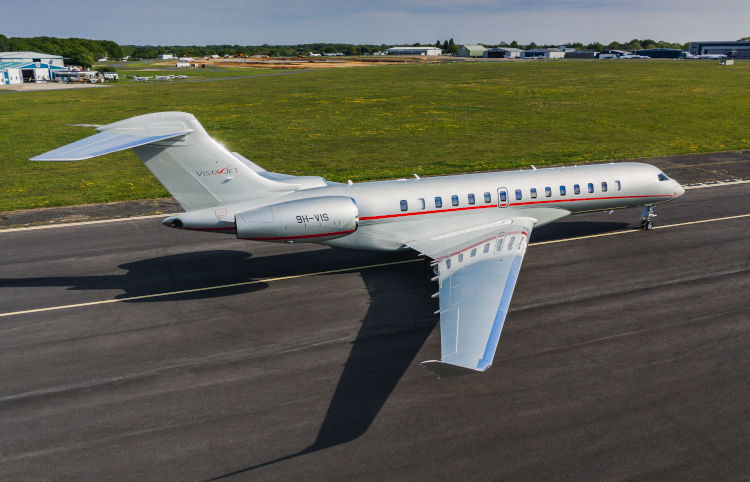 The decision to add the fleet of Global 7500s was made back in 2011/12 during the economic downturn, a move which may have seemed risky at the time. Moore says, “VistaJet makes decisions that might be called bold, or that tend to go against the grain.” But those decisions were made as part of the long-term goal to increase VistaJet’s standing as a truly global brand. Moore notes that there are many travelers in the market who may not want to buy a Global 7500 outright (for a sticker price of over $70m), particularly with the uncertainty of the pandemic, but they are willing to buy 100 or 200 hours of access to one. VistaJet forecasts 1400-1500 flight hours per year per aircraft.

“Everyone’s changing the way they fly.”

The pandemic has brought many unexpected changes to the aviation industry, and one of these says Moore, is that people are changing the way they fly. This is partly due to changing international restrictions and quarantine, and partly due to people’s safety concerns. For example, there are now far fewer “out and back” trips being booked, where someone might fly from one city to another for a business meeting, returning home that same day. Instead, people are taking more one-way trips as well as those that involve a longer stay at one’s destination. Whereas someone might previously have flown multiple “out and back” trips every month to the same city, now they are more likely to consolidate that into a ten-day trip. They might also be more likely to take family members along so that they can combine a vacation with business. Moore is seeing more advanced planning of trips, with more people per flight party, and fewer last-minute decisions. 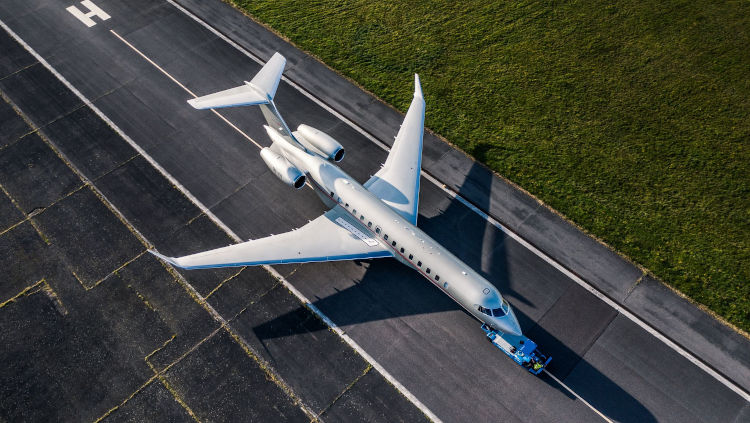 VistaJet reported a 153% increase in European departures in May and June. Although a few of these were long-range, the overwhelming majority were short hops within Europe, based upon current quarantine restrictions. At the moment, Moore says that there is one glaring absence in flight figures: “Flights between Europe and the United States stand out in their absence because they simply can’t be done at the moment.” He does expect that once access reopens, there will be an immediate high demand.

One place where VistaJet is using its long range aircraft is in its new "Safe Havens" selection of exclusive trips. “We are an aviation company,” Moore says, “But we are also a lifestyle business.” As such, the company is constantly looking for new experiences that their members can enjoy. With the world evolving to meet travel restrictions, people are looking for safe places to escape with their families. Among the available destinations are a private island in the Maldives, the seclusion of the Galapagos Islands, or a truly memorable safari from the plains of South Africa all the way to the frozen landscapes of Antarctica. VistaJet says that each of the trips is tailored around a members’ individual passions and preferences.