The ARGUS TRAQPak numbers for November 2021 showed a 54.1% increase in global flight activity, when compared to the pandemic deflated November 2020 figures. In the North American market there was an annual year over year gain of 45%. Holiday air travel has rebounded significantly from last year. Furthermore, Travis Kuhn, VP of Market Intelligence with ARGUS International, Inc. says that “Sunday November 28th was the busiest day on record.” The Sunday immediately following Thanksgiving set a new record with 13,000 private flights. Kuhn notes that other days leading up to and following the holiday were also busier than usual.

As the data (courtesy of ARGUS) shown in the graphs below indicates, North American flights have rebounded from their low point in April 2020, and have risen well above pre-pandemic levels. This first graph shows the trend in number of monthly private flights over the last four years. 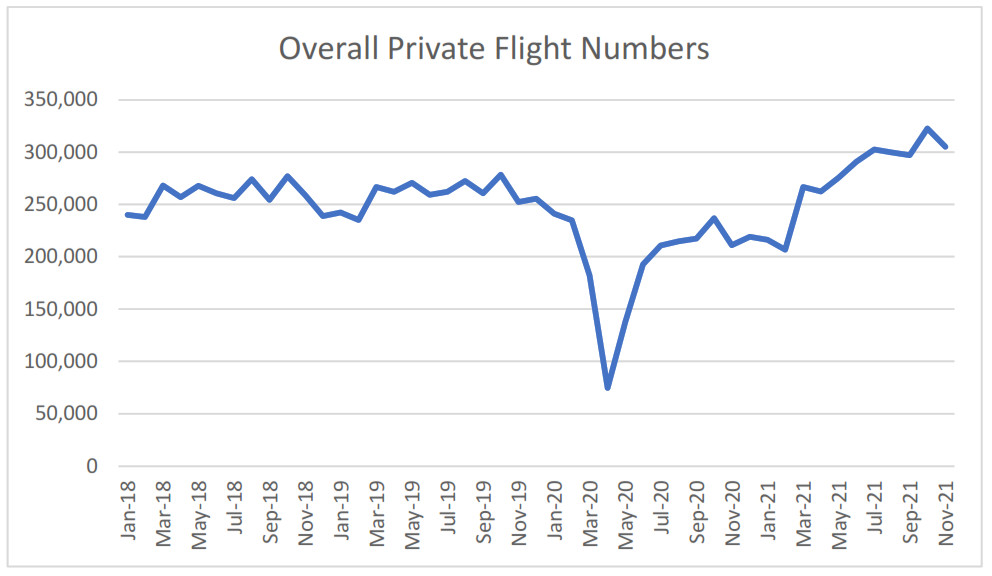 The same set of numbers shown next to each other on the graph below, helps to convey how much 2021 (the yellow line) is running above prior year trends. Flight numbers started to exceed prior years in late spring 2021, and have continued to grow throughout the year. 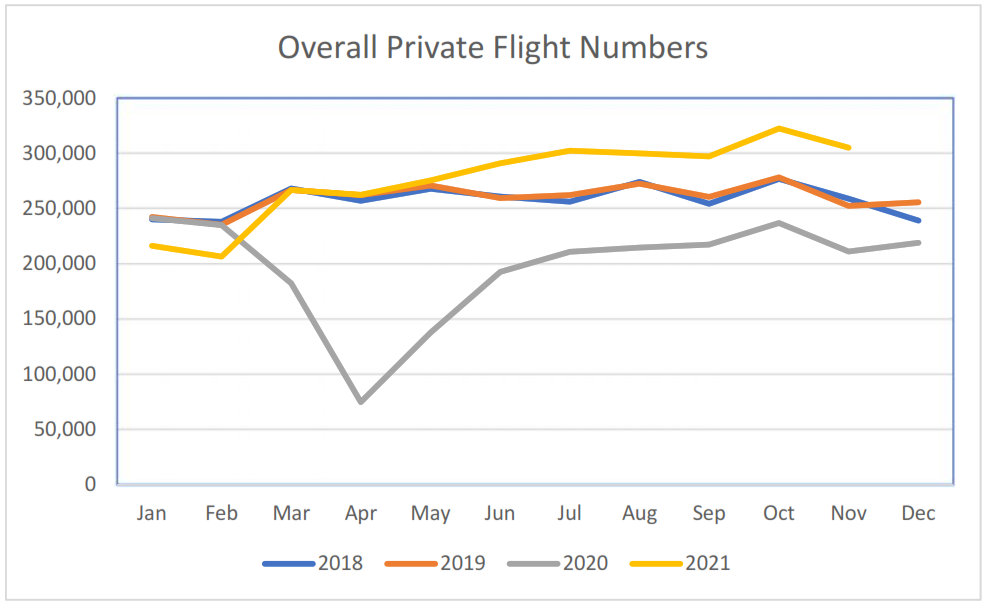 Looking at the breakdown of these North American flights, both Part 135 (charter) and Part 91k (fractional) have increased by about 20% from pre-pandemic levels. These results tally with other reports throughout the year, that have shown how lack of service and health and safety concerns are causing a lot of people to move away from commercial flights, and to explore private aviation options. A lot of these increases are driven by new private flyers, in addition to regular private flyers increasing their usage levels. 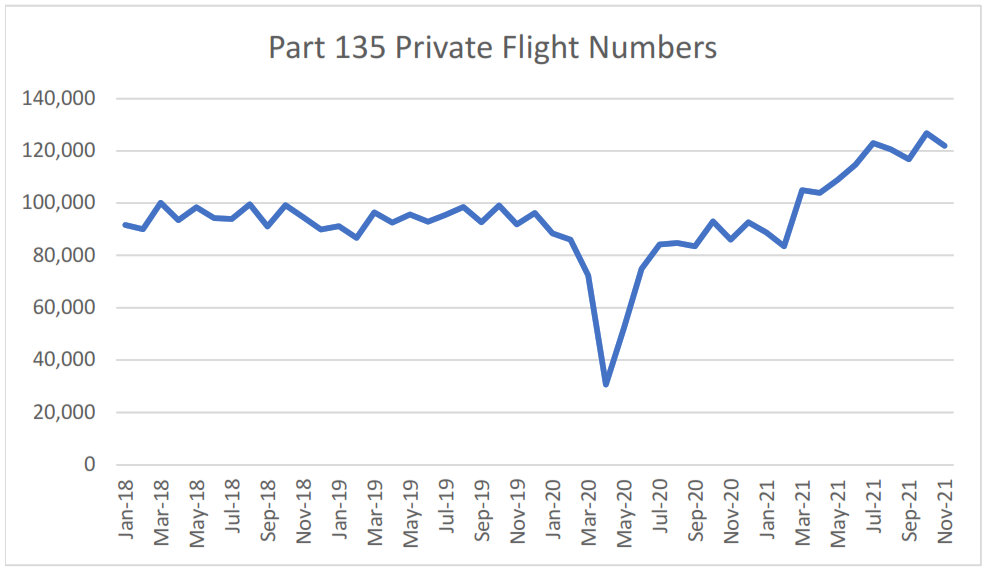 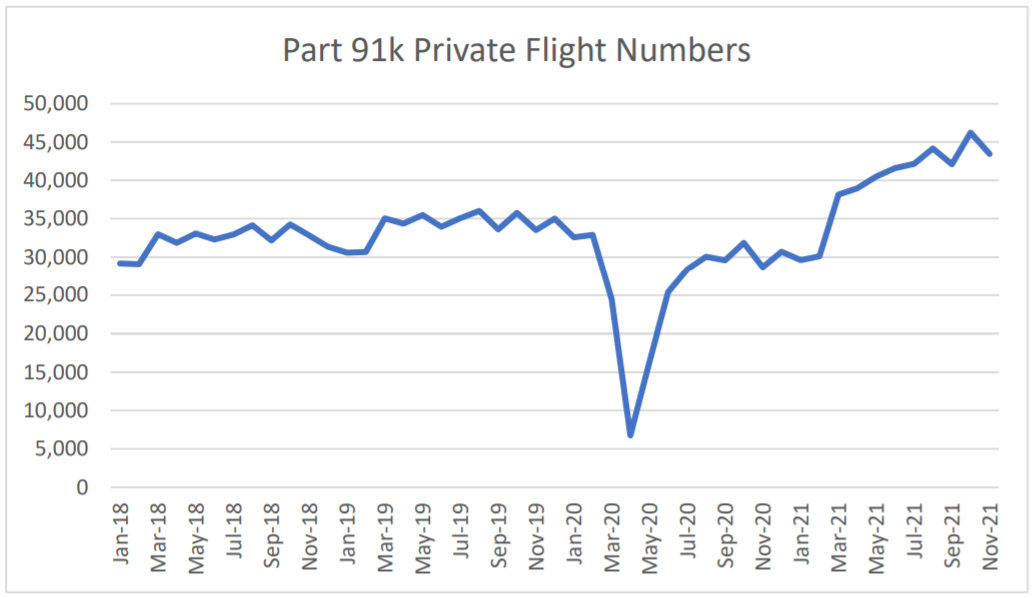 The figures for Part 91 flights are shown below. These are flights in owner occupied aircraft, and may be company owned or owned by UHNW individuals. These flight numbers are only slightly above pre-COVID figures. 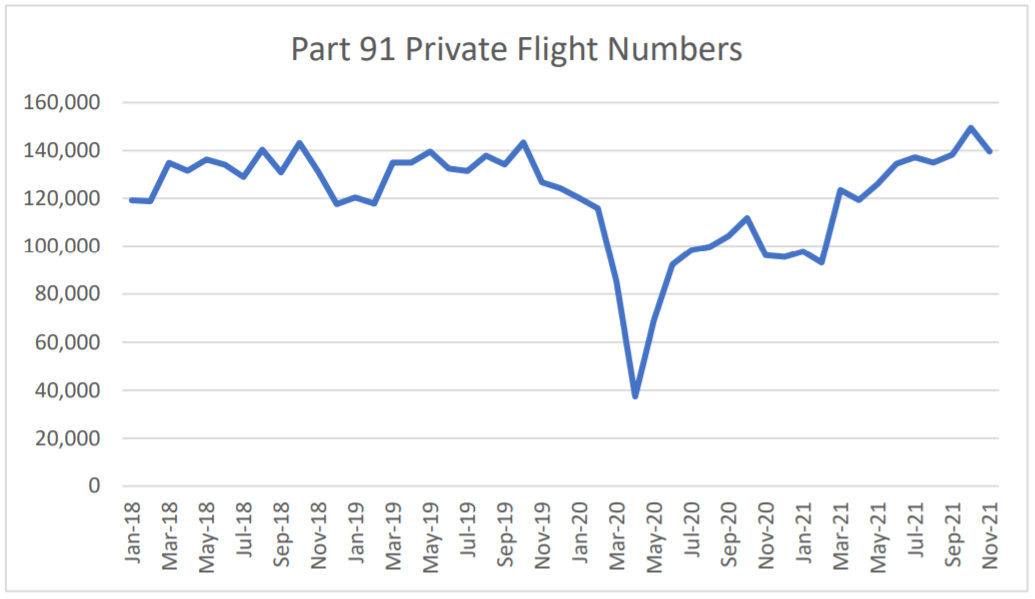 Private aviation operators are responding to record-level demand in a number of ways. The first is by adding more aircraft to their fleets. NetJets recently announced that they will be adding 125 new aircraft to their fleet by the end of 2022. This amounts to an additional investment of $2.5 billion. They are far from alone in expanding their fleet as a slew of other recent reports have shown. Over the course of the next year, Flexjet is adding about 65 new aircraft at a cost of $850 million. This will increase the size of their fleet by 40%. FlyExclusive is planning to add about 50 new aircraft in 2022 and PlaneSense are adding another 10+ Pilatus aircraft. While some acquisitions are part of existing growth plans, others have been added to the calendar sooner than planned, due to the demand.

In dealing with this increased demand, many operators are also seeking to ensure that they continue to provide excellent service levels to their existing customers. Therefore, jet card sales to new customers have been halted by NetJets, Flexjet, Sentient, and Jet Linx, amongst others. Other jet card and membership providers are still taking on new clients, but they have changed some of the terms of service for new customers. For example, Air Partner have increased the number of “Peak” travel days. Wheels Up is requiring new customers to wait 90 days before they will be allowed to fly unless they make an additional deposit.

Both jet card and charter providers have significantly increased their hourly rates, especially for smaller aircraft. In many cases, rates have soared by well over $1,000 an hour.

What will December bring?

With such high activity in November and with October (normally the most active month of the year) being the busiest on record at over 320,00 flights, industry analysts are confident that December will be equally hectic. Kuhn says it will “probably be the busiest December on record” with predictions that figures will be up 37% over last year, and up 17% over 2019. European figures are expected to show a 49.9% increase over the same time last year. Kuhn expects to see “individual record-breaking days” during December as well.

Kuhn adds that while Part 135 and 91k flights have pretty much reached capacity, Part 91 still has room for recovery. Overall, the private aviation industry has grown by about 20% this year. At the same time, private operators continue to rapidly recruit and a shortage of pilots and technicians may slow future growth.

Looking further ahead, Kuhn is still expecting further growth of about 9-10% in 2022.