As society takes careful steps to reopen after the COVID-19 pandemic closures, there are several indications that private jets and business aviation flights are increasing.

In mid-April, we reported that both private and commercial aviation had seen a significant drop in traffic as travel plans worldwide were put on hold. Flight demand was down by 30% as of the end of March. Barely two weeks later, ARGUS reported a 74% drop in general (non-commercial) aviation, compared to figures for the same time period in 2019. This was accompanied by an 84% drop in demand for fractional flights.

Now ARGUS reports indicate that demand is back on the upswing. In addition, both Sentient Jet and Air Partner have recently seen marked increases in private flight bookings for the second half of 2020, indicating this would seem to be an industry-wide trend.

According to ARGUS "Business aircraft operations continue to trend upward. May 2020 gained back 1/3 of the total losses that we experienced in April. June is on pace to report a year over year decline of 27% which would make up another 1/3 of our COVID-19 losses. Beyond that we forecast that July & August will each be off around 17% year over year.”

ARGUS data shows that General Aviation figures hit their lowest point in mid-April, with the number of daily flights plummeting to a fraction of those earlier in the year. By the end of May, numbers had climbed back up to as many as 3,000 flights per day, although this is still notably lower than pre-pandemic flight numbers.

ARGUS data for Part 135 Charter flights dropped from as many as 4,000 flights per day in early 2020 to just over 600 on April 12. As of May 31, flight numbers had risen back to over 2,000 per day. Overall the total May charter flight numbers were up 70% compared to the April numbers.

In February 2020 there were somewhere in the region of 1200-1400 fractional flights per day, but numbers dropped sharply from mid-March. Numbers stayed very low for about 5 weeks, reaching about one tenth of earlier figures at the low points. They have since shown a steady climb, with total fractional flights in May being 140% higher than April flights, and within these figures the number of light jet flights have seen a 149% increase month over month.

The graphs show a clear trend: Although private flight numbers are still below last year’s, as a result of the pandemic, both the fractional and charter markets are seeing a slow but steady return of business. That being said, they still have a way to go. The ARGUS numbers for European business jet activity tell a similar story, with an overall increase of 54% in May compared to April.

The graph below from FlightAware shows similar figures for business aviation. January and February flight figures were on par with those from last year and then with the coronavirus restrictions came a sharp decline in travel. The FlightAware numbers now show signs of recovery with numbers slowly rising again. 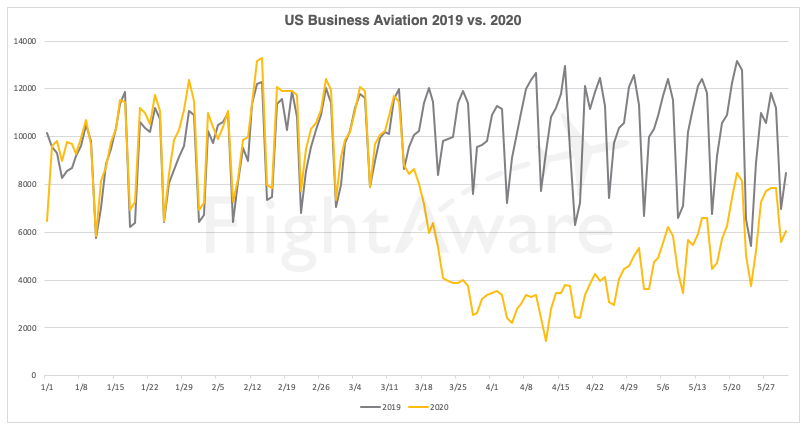 Daniel Baker, CEO of FlightAware is encouraged by the numbers, saying: "The key thing to look for in the weeks to come is whether it will accelerate beyond the old numbers as companies look to resume business meetings.”

Baker goes on to note one area that is not showing any signs of a rebound. At the time of writing, commercial aviation figures are approximately 75% lower than they were last year. Many business travelers, fearing for potential health risks of flying commercially, are instead looking to private charters and fractional memberships for their travel needs.

FlightAware’s graph comparing commercial flight data for this year and last year tells a bleaker story than in the general aviation sector. Following a drop in March, there is yet to be any sign of a meaningful rebound. 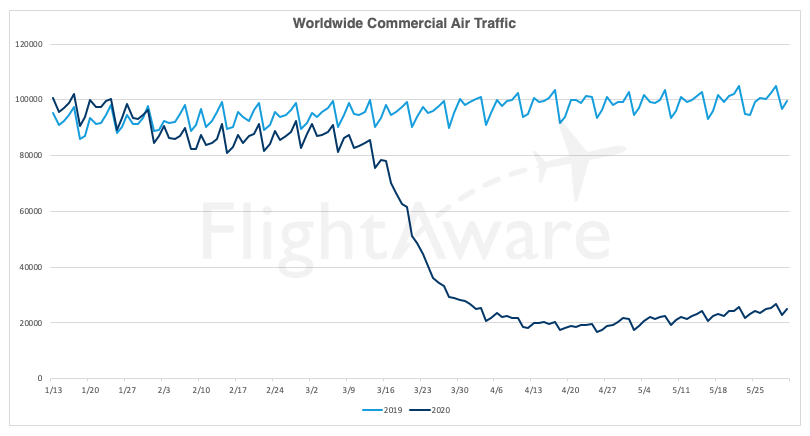 A drop in demand and a need to recoup expenses has also led to recent announcements that commercial airlines will no longer be servicing a number of US cities. Delta has said it is indefinitely suspending certain routes to 11 US cities and Ottawa. This is in addition to another 14 airlines, including United, American, and JetBlue, all dropping service to some smaller markets. While this is bad news for commercial aviation, it is no doubt a bonus for private aviation companies who offer the ability to travel to the destination of your choice.

Business travelers may now choose to fly privately to their meeting, rather than deal with commercial transfers and possibly lengthy routes from the airport to their final destination. This is also likely to impact some leisure travelers, particularly since such popular destinations as Aspen, New Orleans, Palm Springs, and Key West are among those facing commercial cuts.