With some of the emotions from last years US election having died down – at least a little bit - we decided to take a look at how the Presidential candidates used private jets. The election spending filings show all the major candidates made use of private aviation. With the final candidates flying hundreds of hours and spending millions of dollars as they crisscrossed the country.

For the companies supplying these planes, the logistics can be some of the most complicated operations and services they provide.

The election filings show that during last years presidential primary season most of the candidates, including Ted Cruz, Jeb Bush, John Kasich, Scott Walker, Ben Carson and Bernie Sanders all used private jets. And of course, once the conventions have been held and the nominations decided, both Donald Trump and Hillary Clinton and their VP nominees used private planes extensively.

The candidate's reasons for flying privately are largely the same as any other user of private aircraft including the timesaving, flexibility, privacy and convenience. Overall they turn to private aviation simply because it’s the most efficient way to cover vast distances and meet their demanding travel needs.

The 2016 season was no different to the other recent presidential election cycles when all the candidates have used private jets. Misty House, VP of Operations at Air Charter Team, noted "We have provided aircraft for primary candidates in the last five election cycles," going all the way back to George W Bush in 2000.

Early on in the primaries, the planes are usually standard private charter aircraft, from bigger Gulfstreams and Bombardier Globals down to Hawkers 400s (for just the principal). In these early days, each candidate usually travels with just a small group of close advisors or may even go alone, so light, mid-size or heavy private jets are very suitable. The mid-size and heavier jets, such as the Globals and Gulfstreams are used for cross-country trips or if there is a larger group of staff involved.

Once each party's nomination for president and vice president has been decided, the pace of travel steps up immensely, and bigger aircraft are used.

The Boeing 737 is “the workhorse” of the campaign trail once the candidates move to private commercial size jets. But candidates also have personal preferences and requirements, so, for instance, Trump has his own Boeing 757, and in previous election rounds, Obama also used a 757 while Mitt Romney chartered an MD-83.

These larger planes are used because they are more spacious and can accommodate everyone on board. Candidates typically travel with their own staff and advisors; then there can be over 20 secret service agents and multiple members of the media. The planes are usually configured inside with all first class seats and can be further customized to suit particular requirements.

These larger commercial size aircraft are tailored to suit each candidates requirements. The comfort, privacy, and working space available to a candidate and staff on a customized aircraft are important to help them accomplish their missions. Both the interior and exterior of the plane can be customized to smooth out the rigors of campaign travel.
“We usually build partitions and separate cabin areas to give candidates some privacy from the traveling press,” noted Mike Klemm, Director of Commercial Airliner Operations at Private Jet Services. “One campaign asked if we could install a washing machine for clothes on the plane,” he continued. This may seem a little crazy, but if you’re on the road for several weeks, laundry can become a major issue, especially if you have to look good in front of the cameras all the time. Sleeping berths are another feature that can be custom built into the planes; again if you’re mainly living on the aircraft, this can be a real help to arrive refreshed at a destination.
All the aircraft are also customized with external decals, so you’ll see them with the campaign slogans and logos and the candidate's name along the fuselage. Plus they can be changed to any color to match the campaign graphics.

Providing a comfortable and pleasant experience to the traveling press and Secret Service is also a major benefit to the campaign.

Early on in the Presidential races, there is a lot of “wait and see" on the part of the charter operators, as candidates (their customers), may drop out at any time, so they are never sure how much longer their services will be needed.

Once the parties have identified their candidates, the travel intensifies. The general procedure is that travel plans get released on a Friday for the next weeks flights, but they can change due to events and depending on where the candidate needs to be. “The complexity of these missions is the most challenging thing we do because so much of the schedule is reacting to polls, news, and events. As a result travel plans can constantly change,” said Mike.

“Last November Donald Trump hit 6 or 7 states on the Monday before election day,” said Misty. “The same was true in the previous election, “Romney and Ryan did 6 or 7 stops each, for each weekend day before the election, and there were 54 other business jet trips by their surrogates that same weekend,” she continued.

Well before the final week, the travel schedule becomes fairly hectic. "There were days where we did 4 or 5 cities in a day. Most of the time it's targeting a given area of the country, but sometimes things change, and the flight legs were longer,” noted Mike. “It’s impossible to keep their schedule and do it in any other way than by private plane," he added.

As an example, between the Republican Convention and the election, Mike Pence flew 238 flights covering 140,000 miles with a total of 394 hours in the air. The chart below shows the trips Mitt Romney took in his 2012 campaign.

"We can keep to these tight schedules because for a lot of the year we're providing aircraft and services to the worlds top rock bands and the winners of 13 Stanley Cups and 10 Worlds Series," said Greg Raiff CEO of Private Jet Services. 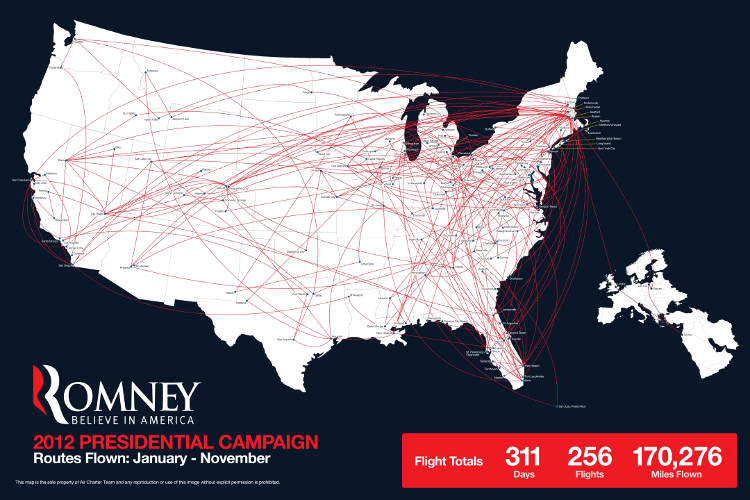 Some of the biggest challenges arise when these large planes fly into local airports that do not usually see a plane of that size. The flight organizers have to make sure there are ground crews available for restocking the aircraft, and they have to consider emergency response facilities and coordinate with the Secret Service on security.

There’s also a lot of coordination with local ground transport for when the plane arrives, to ensure everyone can get to the meeting location. Mike gave an example of a 737 landing at a remote upstate New York location, and then having helicopters standing by - 1 for the candidate and 1 for secret service – to travel the last short distance to a meeting.

“Once the meeting or rally is over the goal is to get wheels up asap,” said Misty. This means the catering has to be on board, the Secret Service has to do their sweep and go through the security protocols in time, and all the press and staff are held in a "Security Bubble" after the sweep. So there’s a lot of coordination.

With the planes in the air for so long, it also means they have to swap the crews out after certain time periods. The typical approach is to constantly have two crews on full rotation, and the replacement crew will fly in on a commercial flight to meet and take over the candidate's aircraft. 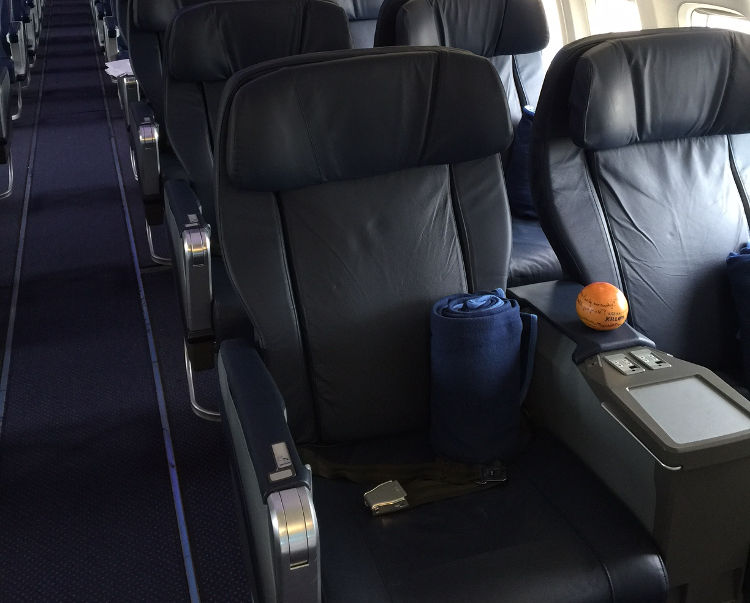 For long periods of the campaign, people are on the planes for so long, that sometimes their only chance to eat is in the air. "No-one wants to eat a turkey sandwich every day for six months," said Misty “so we work hard to have a broad selection of food available.”

Mike noted, “We’ve celebrated a bunch of birthdays on board, we’ve done trick or treating on Halloween, and the day before the election we have the plane decked in streamers and red, white and blue balloons.”

One cute tradition that occurs early in the campaign, when everyone is trying to get to know each other, involves a press member who brings an orange on board. They will write a question on the orange and roll it down the aisle. The candidate writes an answer on it and rolls it back. “This occurs on every campaign,” said Misty House.

Overall the aircraft providers said it’s an exciting time leading up to the election cycle, but equally, they are relieved when it’s all over.
There’s enough time between the cycles for them to recover, remember the excitement and forget about the hard work, and just look back at what was accomplished.