As a second year affected by the COVID pandemic draws to a close, we have seen demand for private aviation services reaching new highs. At the same time, supply chain issues are causing problems in some areas. We look at private aviation industry forecasts for the coming ten years to see what lies ahead. Included are insights from manufacturer Honeywell and analysts at JETNET iQ. Also included is information from Jetcraft’s five year forecast for the pre-owned business aviation market.

Our industry experts predict between 7,400 and 8,529 new business jet deliveries between 2021 and 2030. That amounts to an estimated total dollar value of $238 billion to $244.9 billion. Whereas last year saw JETNET iQ making the most conservative predictions, this year, Honeywell is forecasting the lower end of the spectrum. Both sets of experts’ predicted unit deliveries are higher than those forecast in 2020.

The rebound from COVID-19 within the private aviation industry has been rapid, with business now exceeding pre-pandemic levels. This, combined with a global economic recovery, is driving strong optimism within the industry. In addition, a robust pre-owned market is further influencing demand. On the other hand, supply chain issues are affecting everything from parts and construction to delivery of new aircraft. At the time of writing, demand is far outpacing supply.

In this environment, Honeywell reports that 90% of the operators they surveyed said the pandemic had not led them to postpone purchase plans of new or used jets. Nearly 100% of those surveyed had not cancelled any existing orders or pre-purchases. In other words, it’s business as usual. And when it comes to replacing existing aircraft within the fleet, only 4% of survey respondents planned to sell an aircraft and not replace it within the next five years. That’s a decrease from 10% last year.

"Our latest operator survey results support continued private jet usage growth, as more than 65% of respondents anticipate increased business jet usage in 2022. Despite the ongoing challenges presented by the pandemic, flight hours have recovered and grown beyond pre-pandemic levels. The overall health of the business jet market is strong, and growth is expected to continue."

This optimism is mirrored by JETNET iQ. In their survey of owners and operators within the private aviation world, 78% said they felt that the industry was past the low-point and on the rebound. This indicates a global recovery, especially in the US and Europe, and paints a hopeful picture for higher aircraft usage and sales.

Honeywell’s 10-year forecast predicts an average 3% annual growth of deliveries, with operators planning new purchases equal to 14% of their existing fleets in the coming five years. These purchases are both replacements and additions to current fleets. 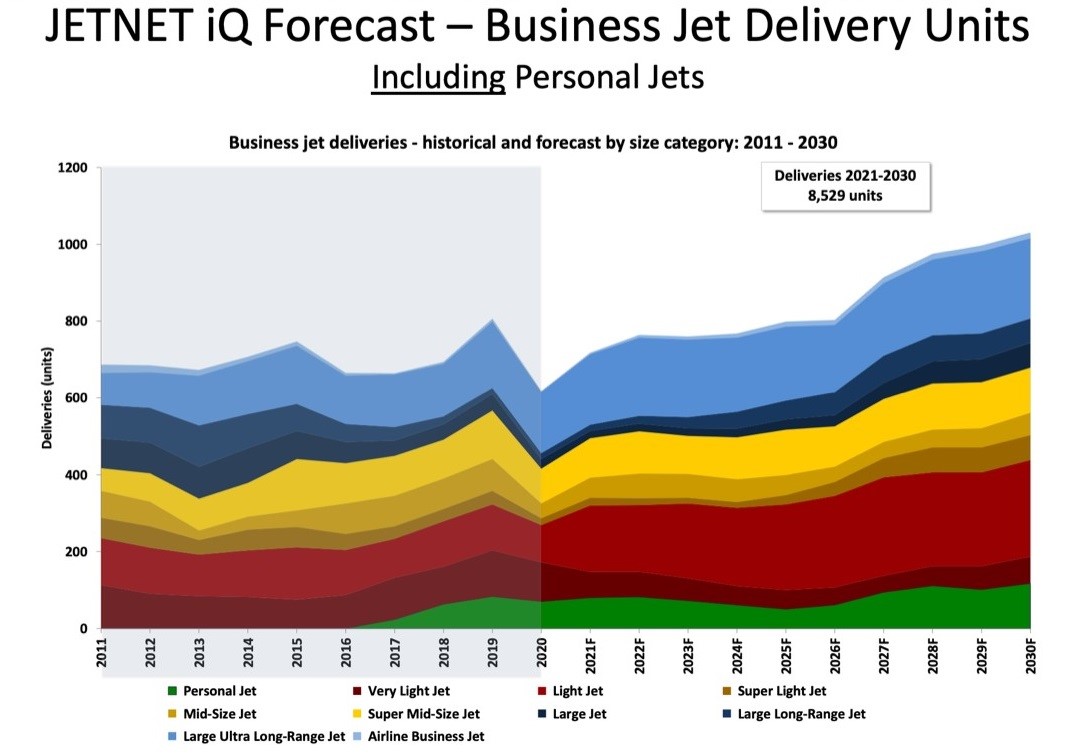 Honeywell’s forecast focusses on larger-cabin, heavier aircraft dominating new business jet expenditures. They predict that over the next five years, these larger craft will account for 72% or more of all expenditures. That increased desire for longer-range jets has been seen in recent years, and no doubt the pandemic has further spurred a need within the business world for private planes capable of international travel.

JETNET iQ’s forecast mirrors this strong demand for larger aircraft, and these do make up the overall majority of dollars spent. At the same time, though, the JETNET iQ chart shows a major market segment for very light and light jets. This correlates with the increased demand that many regional charters and providers have seen as people switch from commercial to private aviation. 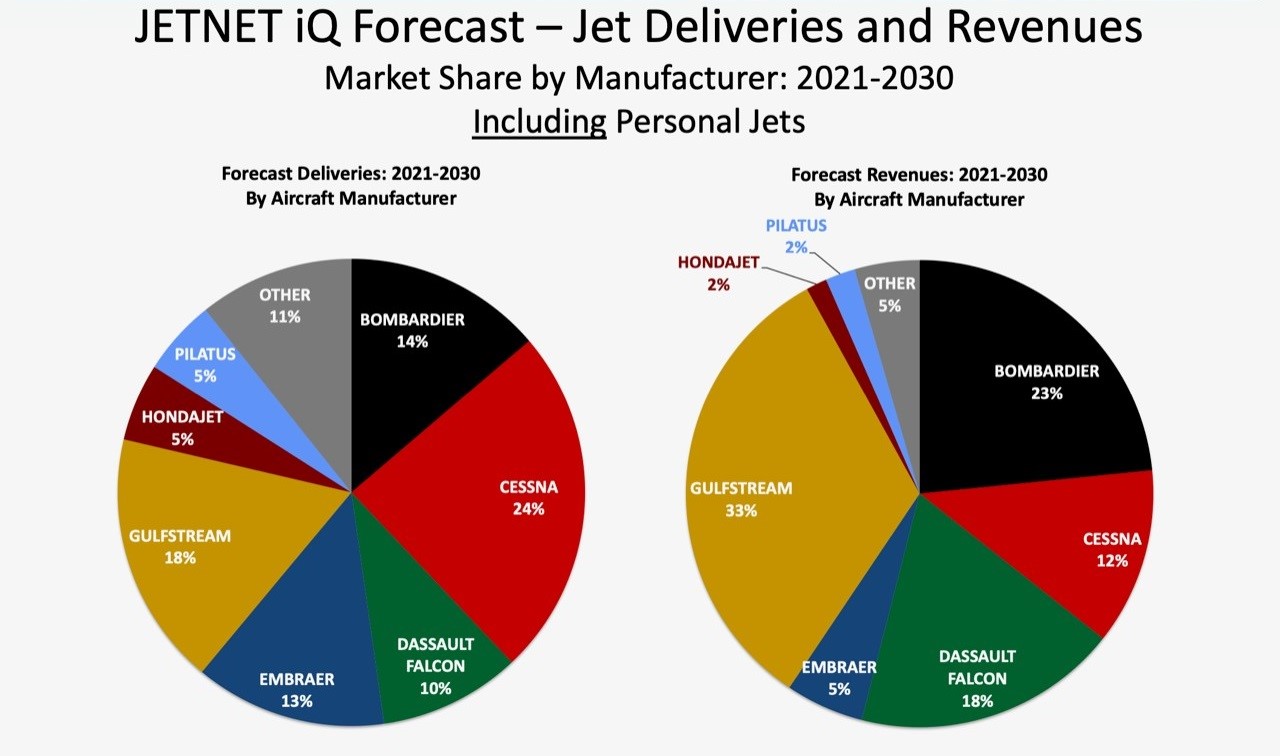 In terms of units delivered, JETNET iQ sees Cessna taking the lead with 24% of deliveries. Larger jet manufacturers Gulfstream and Bombardier follow closely behind. When it comes to revenue, these two manufacturers of long-range jets take more than 50% of the market share, with Cessna and Dassault Falcon leading among manufacturers of lighter jets.

Honeywell’s forecast included a detailed look at the markets within different global regions. North America holds its lead in the worldwide marketplace, with 63% of demand for new jets in the next five years. Although five-year new acquisition plans show a slight (3%) decline, this is thought to be due to smaller operators being wary of effects of the Delta variant. Findings do show an increase in operators planning purchases within the next two years, with 35% expressing such intentions.

European governments put strict travel restrictions into place during the pandemic. This continues to cause some uncertainty in the market as travelers are wary of making plans that may need to be cancelled. As a result, new aircraft purchase plans have declined by 5% and the continent’s share of global demand has dropped to 16%. In recent years, European operators have been busy replacing aging fleets, but the rate of new and replacement acquisitions is now slowing.

Coming in at third place for global jet demand is the Asia-Pacific region. Despite ongoing geopolitical concerns and commercial tensions in China, operators plan to replace 15% or more of their fleets within the coming five years. Some fleets also show signs of expansion.

Latin America is showing continued recovery and growth, with purchase plans back to pre-pandemic levels. The region accounts for 5% of projected business jet demand in the next five years, and increase from 3% last year. Honeywell attributes this to an improved economic outlook in the region.

Lastly, the Middle East and Africa (MEA) remain fairly steady with their 4% of the global market share. While other regions are continuing their plans for expansion, MEA shows a decrease of 7% among those who plan to replace or add to their fleet. Purchase plans are also lower than they have been in five years.

As previously discussed on the SherpaReport, the market for pre-owned aircraft has seen a huge boom, this has been exacerbated as supply chain issues have caused delays in the new jet market. Honeywell reports that there has been a sharp increase among business jet operators with plans to buy pre-owned aircraft. Patrick says, “The increased demand for used jets is estimated at more than 6,500 units over the next five years, putting pressure on an already record low inventory and driving additional demand for new jets.”

Jetcraft predicts even greater demand. They forecast 12,261 pre-owned transactions over the next five years, representing sales of $57.2 billion. By 2025, they predict almost 2,700 pre-owned transactions each year. Demand will be particularly strong in larger and longer-range aircraft, especially with borders reopening after the pandemic. This accelerated demand and interest in pre-owned aircraft (as well as in private aviation on the whole) is, according to Jetcraft, a result of lowered trust in commercial airlines. Fewer commercial services, in addition to increased health and safety concerns are factors. Also contributing to the demand for pre-owned aircraft is the backlog in manufacturing and shipping of new aircraft. Jetcraft's forecast is shown in the chart below. 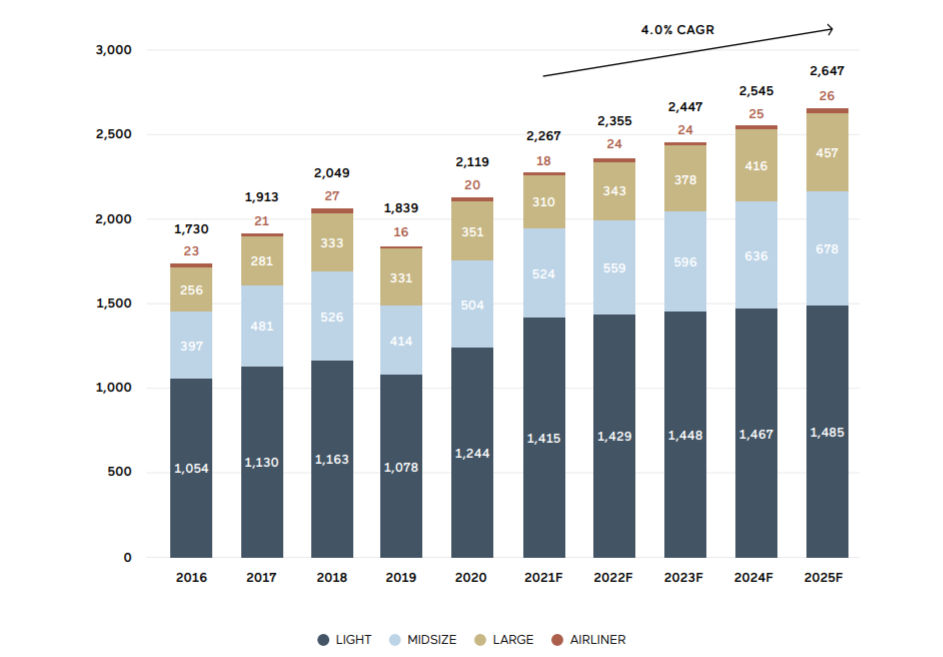 An estimated 28% of the worldwide business jet fleet is likely to be replaced with used jets over the course of the next five years. That is a 3% increase over 2020 forecasts.

The following chart from JETNET iQ illustrates pre-owned sales and available inventory in recent years, highlighting the decline in inventory and the increased sales in the current climate. 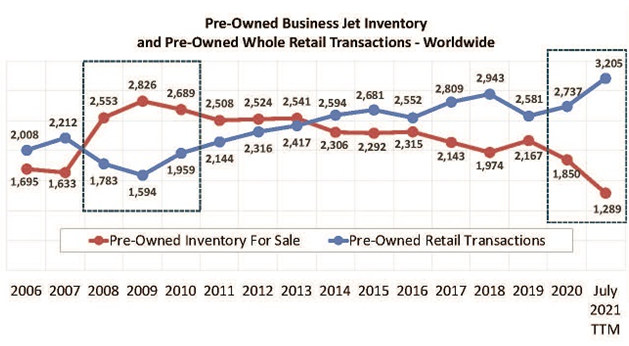 Further details on each of the forecasts can be found at:
Honeywell
JETNET iQ
Jetcraft