The Largest Fractional Aircraft Operators in 2020

The numbers from aviation services company ARGUS, show fractional aircraft operators flew 504,821 hours in 2020 a decrease of 115,467 hours (18.6%), compared to 2019. The number of actual flights by the fractional operators dropped 22.4% in 2020 compared to 2019 flight levels. The largest operators are ranked and discussed below.

The table below shows the largest fractional aircraft operators in North America ranked by number of flight hours in 2020.

The order of the rankings is the same as in the last two years, with NetJets very much the largest fractional jet operator, representing 59% of all the hours flown.

The only major change in the order is the disappearance of Flight Options in 2020. The company is part of Directional Aviation, which also owns Flexjet and all the fractional activity is now carried out under the Flexjet brand.

The overall fractional flight hours by month followed a very similar pattern to that seen across all private aviation, with a huge COVID inflicted drop in April, followed by a steady recovery. The graph below, courtesy of ARGUS, shows the hours by month compared to 2019. 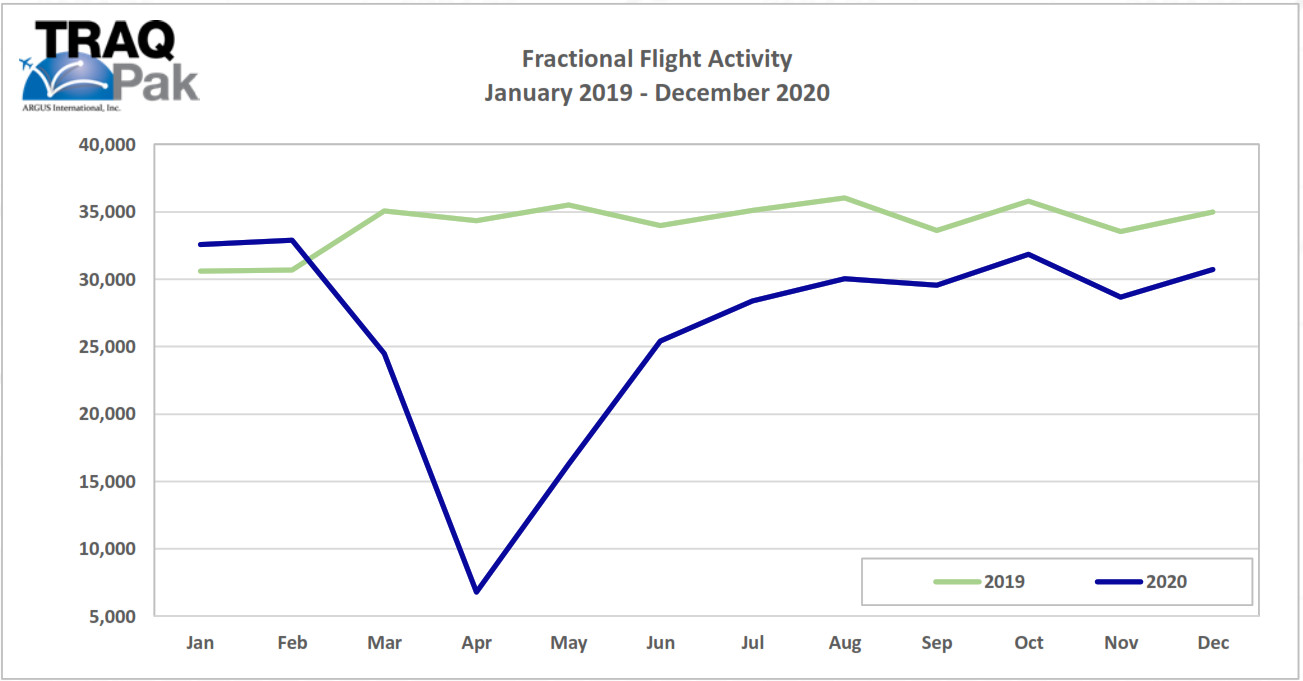 To a large extent the fractional operators did a lot better than other parts of business and private aviation. By the end of the year overall fractional activity was about 10% below 2019 levels.

The flights by type of aircraft are very revealing. The light jet/small cabin fractional flight hours were only down 6.0% in 2020. Whereas the large cabin hours declined 34.0%. The fractional flights in these bigger planes were reduced by all the restrictions on international travel, which limited the number of cross border flights. In comparison a lot of people were using the smaller aircraft to fly domestically and get away to quieter and less crowded parts of the country.

In addition to selling fractional shares, most of these fractional operators also offer jet cards on the planes in their fleets, and the hours here represent flights for both fractional owners and jet card holders..

NetJets is by far the largest fractional operator with over 750 aircraft worldwide, including managed aircraft (through Executive Jet Management) in addition to its fractional fleet.

The company says it is consistently operating at 85% of typical flight demand, and expects to be back to 2019 levels by the second half of 2021. The mix of flights has certainly changed. Pre-pandemic, leisure flights accounted for approximately 60% of NetJets’ flights, while travel for business was at about 40%. Now, leisure and business travel constitute 80% and 20%, respectively.

Flexjet is part of Directional Aviation which also owns Sentient Jet, FXAIR and Private Fly, plus several other private aviation companies. It has been the second largest fractional aviation company for a number of years.

The fleet includes a range of aircraft from Phenom 300 light jets to ultra-long range Gulfstream G700s. The 2020 launch of charter provider FXAIR included the use of second generation Flexjet aircraft, maintained and flown by Flexjet (but no longer used by fractional owners), which are only available for charter through FXAIR.

PlaneSense operates the largest civilian fleet of Pilatus PC-12 turbo-prop aircraft in the world, and in 2018 added the Pilatus PC-24 jet to its programs. Overall the company provides access to more than 40 aircraft.

Airshare offers both fractional shares and their Embark jet card, which both provide day based access to their fleet of Phenom 100 and Phenom 300 light jets.

Michigan based Northern Jet Management offers fractional ownership in the Bombardier Learjet 45XR and its customers, aircraft and pilots are all located in the Midwest.

Headquartered at John Wayne airport in California, West Coast Aviation Services offers fractional ownership in the King Air 350, with a primary service area in the Western US.

The hours shown as NetJets Transportes are for planes that are in the NetJets Europe fleet, and that made takeoffs or landings in North America in 2020.

Looking into 2021, ARGUS Traqpak analysts are forecasting 25% growth in flight activity for the first half of this year for total private aviation, including fractional flights, compared to 2020 numbers. This will still be down 13% compared to 2019.