JetSuite Expands their Service to the Northeast

With a mission of making private air travel accessible to "more people than ever before," as JetSuite CEO Alex Wilcox noted, the fast growing private aviation company expanded their services over the summer offering service to hundreds of airports throughout the region's major metropolitan areas including New York, Washington D.C., Boston and Toronto.

Since its 2006 fleet launch order for Embraer Phenom 100s, JetSuite has taken their value priced light jet service to the Northeast, giving more people an opportunity to fly and with more locations to fly to.

There is more that goes into choosing your travel options than just the base price alone; accommodations, total travel time and safety concerns should all be taken into consideration. Exploring the pros and cons of private jet travel can serve to help you make an informed decision about your next flight.

Private jet travel offers a wide variety of benefits for those who have to travel, especially today. When you value your time and money, a private jet charter company can help you with your air travel needs while keeping within your budget and time constraints. JetSuite specializes in shorter hops- like city to city business travel; due to the roughly 1,000 mile range limitations of the Phenom 100, they are best suited for shorter trips. Other providers with large aircraft may be the better option for flying cross-country or oceans.

JetSuite, is pioneering a new class of service. "We're attempting to make private charters more affordable and accessible," says Keith Rabin, president. Most travelers admit that they would prefer to fly private if they could afford it. 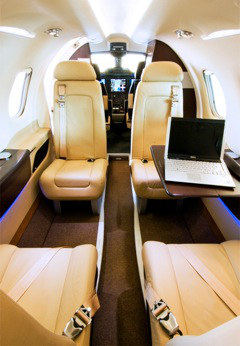 • No dealing with airport security

• No wait times and few to no layovers

• Park your car and walk straight onto the plane

• Excellent, personalized flight crews that are able to be more attentive due to fewer passengers

A full list of reasons to fly privately is here.

70% of private jet travel typically includes four passengers or less, and is in the range of two hours or less, but competitors often use aircraft that seat more people, and that are capable of traveling further distances for shorter trips. This often necessitates higher fares. JetSuite is typically able to pass the savings on to the customer.

Previously, the biggest downside to private jet travel is simply that the average person cannot afford it. JetSuite is working toward changing this status quo. They offer a better value with great rates as well as membership package options and special deals to help you save even more. When you add in the costs of wasted time from commercial travel, you may end up saving money by taking a private charter instead.

According to JetSuite marketing director Sara Klinger, while their standard trip is less than 1,000 miles, they are able to make longer trips; however, a stop for refueling would be necessary, taking approximately 25 minutes. If time is the biggest concern, you may be better off with a different provider.

JetSuite's lowest airport fees are typically found at low cost airports in the Southwest and Northeast regions of the United States. The company states that as they continue to grow, "airport fees will go down in other areas."

In celebration of its expansion to the Northeast, JetSuite has offered special rates between some of the areas. Some sample rates for the full four person plane include:

Once you've weighed the pros and cons, it's easy to see why JetSuite has opened the market for private jet travel to more people, especially for shorter trips or business travel where you need to get where you're going and return home more quickly.