Fractional Ownership of a Midsize Jet

Several aviation providers offer fractional programs for midsize jets with a couple of specific models proving most popular. This article gives an overview and comparison of the programs.

Fractional ownership of a midsize jet may be right for you if:

NetJets is based in Columbus, Ohio and was established in 1964, originally as Executive Jet Aviation. As such, it was the first private business jet charter company. The company was renamed in 1984 when it was acquired by Richard Santulli, formerly of Goldman Sachs. Within a few years, Santulli launched the concept of fractional aircraft ownership. The company has since risen from fractional pioneer to the largest private aviation company in the world. Since 1998, NetJets has been a part of the Berkshire Hathaway group of companies. The NetJets fleet of 750 aircraft ranges from light jets (such as the Embraer Phenom 300) to large long range jets (such as the Bombardier Global 6000).

Nicholas Air began as a small regional aviation company in Arkansas and North Carolina in 1997. Quickly developing a reputation for excellent service and its customer-centered programs, Nicholas Air has grown to now cover North American and the Caribbean. It offers a variety of programs, including fractional ownership, leasing, jet cards, and aircraft management. The company prides itself on its modern aircraft; all of the planes in the fleet are less than 5 years old. Founder Nicholas Correnti remains CEO of the company to this day.

Flexjet was launched in 1995 as a collaboration between Bombardier and AMR Combs. In 2013, Directional Aviation Capital, owned by Kenn Ricci, acquired Flexjet. Since then it has grown to be one of the world’s largest fractional jet ownership providers, and it is the only company to have received the FAA’s Diamond Award of Excellence for 20 consecutive years. The current Flexjet fleet consists of more than 130 aircraft, ranging from the Embraer Phenom 300 to Gulfstream and Bombardier long-range jets. The company is proud to offer “the most modern fleet in the fractional private jet travel industry” with the majority of the fleet less than six years old. Flexjet took delivery of the first Legacy 450 in 2015 and today they operate the largest Legacy 450 fleet in the world. The company works closely with Embraer to provide customer feedback and make improvements.

AirSprint introduced fractional ownership to the Canadian market with its founding in 2000. Based in Calgary, and with offices in Toronto and Montreal, it is the country’s largest fractional provider. The company has a fleet of 15 aircraft and was named the fastest growing fractional aviation company globally in 2017. 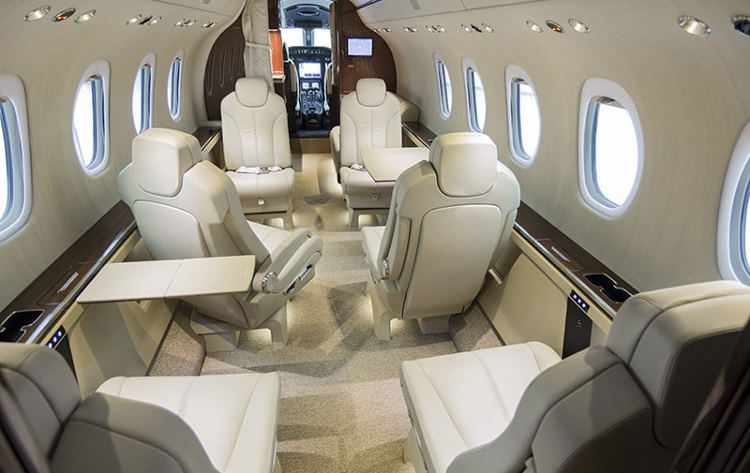 Each company’s fractional ownership program varies somewhat according to size of share, cost, and so on.

NetJets’ fractional ownership program offers shares in 25 hour increments with a minimum share purchase of 50 hours. Just 4 hours’ notice is required for a flight. There are 10 Peak Period Days per year, but NetJets still guarantees the ability to travel on those days with as little as 48 hours’ notice. The minimum commitment required is 36 months. The NetJets fleet currently stands at more than 750 aircraft and owners are always guaranteed access to their class of aircraft or better. Owners may also choose to upgrade to access a larger plane or one with a longer range, subject to availability.

Nicholas Air states that their program is ideal for those who fly between 90 and 300 hours per year. The length of commitment is usually 5 years. For those wishing to leave their contract early, the agreement includes a buy-back provision, or Nicholas Air can provide assistance with selling the share. Every owner enjoys access to the company’s fleet of new aircraft as well as 24/7 concierge service to help with travel arrangements. Members can also make arrangements for more than one aircraft on the same day, should they need to travel with a larger group of passengers or should they need to schedule several simultaneous trips. Nicholas Air offers guaranteed availability and the ability to interchange between aircraft types.

Flexjet’s program is ideal for anyone who flies more than 50 hours per year. Fractional shares are available in 50-hour increments on a contract of 30 to 60 months. A plane can be available within 10 hours of you making a reservation, and Flexjet can even work with you to make multiple planes available at the same time. Their Versatility Plus program allows you to make the most of your flight hours, even if your needs vary from one year to another. If you fly fewer hours than expected in any given year, you can make those hours available to other owners. At the same time, if you find yourself flying more than expected, you can buy hours from other Flexjet owners. Another benefit is Flexjet’s expansive international fleet, allowing owners to buy hours on a larger, longer-range aircraft if needed. This means the company’s effective service area is global. Whether owners need to fly across the US, to the Caribbean for vacation, or to another continent for business, the company’s fleet has the capability to meet that need.

AirSprint offers a minimum share of 25 hours, with shares increasing in 25-hour increments. Different share levels bring different benefits. For example, with a 25-hour share, owners are guaranteed access to a flight with 72 hours’ notice, while those with a 75-hour share need to give a mere 8 hours of notice before flying. Similarly, the number of Reserve Calendar Days (which require extra notice or may be difficult to book) varies from 30 with a smaller share to none with a larger share. Those owning a larger share also get a larger discount on Annual Overhead Fees. All ownership levels share the ability to change aircraft (as available) and have access to all of the US (including Hawaii), Canada, Mexico, and the Caribbean. 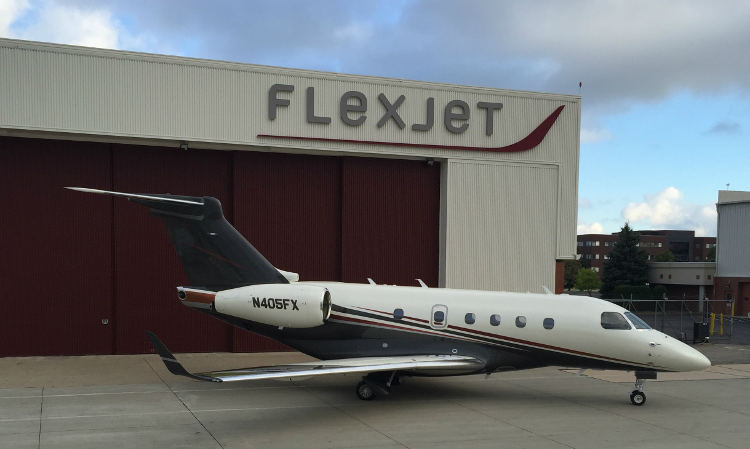 Here are the midsize jets that are available through the largest fractional programs:

Deciding which aircraft best suits your needs will depend on a number of factors, including those in the following table.

The Cessna Citation Latitude is available for fractional ownership through both NetJets and Nicholas Air. The Latitude boasts a spacious cabin, high-capacity baggage space, and seating for up to 7 to 9 passengers, depending on configuration (NetJets has seating for 7, Nicholas Air for 9). The cabin is 6 feet tall, and six feet 5 inches wide. There is up to 127 cubic feet of baggage space. NetJets describes the Latitude as “a true game-changer, designed for luxurious comfort.” It includes an array of onboard amenities, including spacious lavatory facilities, a refreshment center, and in-flight entertainment systems. The large windows allow passengers to enjoy the views during flight; they also allow for more natural light, helping to reduce passenger fatigue.

The Cessna Citation Sovereign is also available through NetJets. The Sovereign is configured to carry 8 passengers and has a slightly longer range than the Latitude, while still providing the same high degree of comfort. NetJets describes it as “the best midsize jet for long-range trips in high elevations.” The cabin is 24 feet in length, 5 feet 6 inches wide, and 5 feet 7 inches tall. It also features a refreshment center, Wi-Fi, DVD, and other entertainment options.

The Embraer Legacy 450 is offered by both Flexjet and Airsprint. Flexjet describes it as “the backbone” of their midsized program. Company executives say that it appeals to many travelers because it has the performance you would associate with a larger aircraft “at an investment level more commonly associated with smaller aircraft.” The Legacy 450 has a cabin six feet tall and seven feet wide, with room for up to 8 passengers and plenty of baggage space. Club seats can be fully reclined into lie-flat beds. Furthermore, the Legacy 450 features a number of special sound-reduction design elements, meaning that the cabin is extremely quiet. The sound features and seating comfort are especially beneficial for longer flights, ensuring passengers arrive feeling refreshed.

A Flexjet spokesman says, “When we conduct a demo flight in the Legacy 450 with prospective Flexjet Owners that have also been evaluating other aircraft in the midsized category like the Cessna Citation Latitude, they are blown away by how much larger and more comfortable the cabin feels in comparison.” 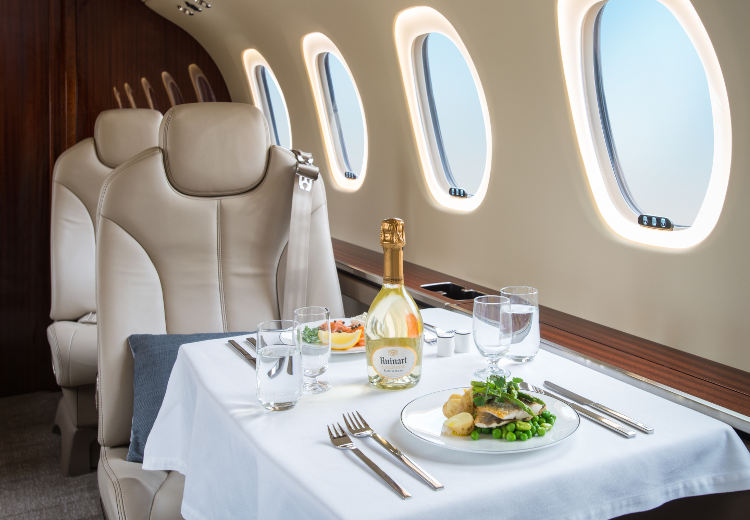 Fractional programs typically feature 4 different types of cost: the initial purchase price, a monthly management fee, an hourly flight fee, and additional fees for fuel surcharges. When considering the purchase of a share, prospective owners should make sure that they understand any and all potential fees so as to avoid any unpleasant surprises later.

The initial outlay or acquisition will vary according to the type of aircraft and the size of the share being purchased. Some of this amount will be returned at the end of your agreement when the share is sold.

Monthly fees can cover operating costs, such as pilot salary, hangar costs, and insurance. Other operating costs such as fuel, maintenance, and landing fees are included in the hourly flight fees. Lastly, check to see if you will be responsible for any additional fees such as Federal Excise Tax and fuel surcharges.

Pricing varies according to company, type of aircraft, and number of flight hours.