Launched a little over a year ago, the Flight Options jet membership has already welcomed its 100th member. With this early success the company has now added the Nextant 400XT to the membership program.

The sole aircraft in the jet membership program at launch was the Embraer Phenom 300, which can carry 7 passengers up to 2,298 miles. The Nextant can take up to 7 passengers, with a range of over 2,000 miles. "Like the Phenom 300, the 400XT offers our members one of the industry's most capable and efficient aircraft, resulting in an unrivaled value proposition. In a very short period, the 400XT has become an important differentiator for us." said Chief Executive Officer Michael J. Silvestro.

"This new program offers a little bit of both fractional and jet card. There's a lot of flexibility in terms of hours, which is what our owners are looking for", said Matt Doyle EVP Sales & Marketing.

Members pay a one-time membership fee to begin accessing the Flight Options Phenom 300 or 400XT fleet for up to a 36 month term. Members then purchase blocks of flight time in 25 or 50 hour increments with a maximum of three blocks of hours per initiation fee. 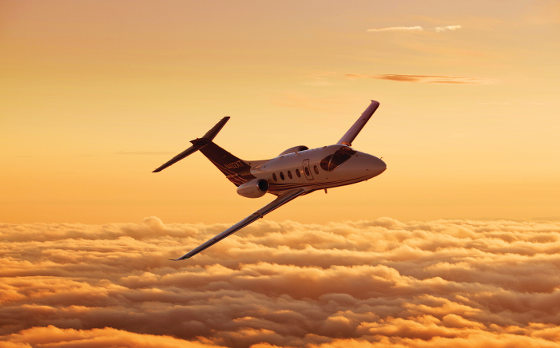 The hours can then be used whenever a member chooses "some members will spread it out over 36 months, some use it in one year" noted Matt. This is quite different to typical fractional programs where members have a certain number of hours per year, for example 50 hours on a 1/16 ownership.

Compared to fractional ownership Matt summed up the flexibility with these four points:

Both aircraft can be ready with 10 hours notice, which is the same notice period as in the Flight Options fractional program. "We have some owners who have both fractional and jet membership in different aircraft to provide the flexibility for different missions," continued Matt.

The table below shows the initiation fee and price for 25 hour block for each of the aircraft.

"A lot of the program popularity is because of the aircraft in the program" said Matt, "The Nextant has 50% more range and is $1,000 less per hour, compared to earlier Hawker 400's, so owners are transitioning to this newer aircraft."

"The Jet Membership Club is the perfect solution for our needs," said Jerry and Kathy Mohr, who are among the program's first 100 members. "The program is the only one that offers us access to the Phenom 300, an aircraft that meets our short and longer-range flights, for a three-year period, without having to own one outright or purchase an actual ownership share in the plane.