The Eclipse 500 Stands Out from the Charter Fleet

Most charter companies offer an array of different aircraft from which to choose. For both business and personal use, probably the main concerns regarding private aircraft travel are comfort, safety and operational costs. When it comes to very light jets, the Eclipse 500 boasts a wide array of these benefits for the charter traveler.

The Eclipse 500 offers comfortable leather seating and luxurious interiors, yet is one of the least expensive light aircraft to operate. The twin-engine very light jet features an 800 nautical mile range, seating for up to four passengers and a very fuel-efficient operation. Additionally, the design incorporates noise reduction technology that offers quieter operation of 40 dB less than Stage 4 noise requirement regulations. The maker, Eclipse Aerospace, claims that the Eclipse 500 is one of the quietest jet aircraft in use.

The Eclipse 500 was brought to the market in 2006 by Eclipse Aviation. Although this company went bankrupt in 2009, other interested investors knew that the Eclipse 500 was a high-quality design. Later that year, Eclipse Aerospace purchased the company’s remaining assets and began offering product support.

William Herp, president and CEO of Linear Air, Concord, Mass., refers to this aircraft as, “a limousine with wings.” He concurs with the fuel-saving benefits the Eclipse 500 offers. Linear Air has Eclipse 500 jets available for charter flights in Boston, New York and Los Angeles.

“This aircraft is making private aviation financially accessible to a wider range of businesses and individuals,” Herp says. “Especially for more remote locations, travel with the Eclipse 500 is comparable pricewise to traveling with some of the larger commercial airlines.” He claims that flying to a secondary market destination that is not close to a major hub can add significant costs to a trip. When one adds the full-fare coach seat price to other cost factors such as overnight hotel stays and rental car fees, the price, many times, ends up equaling the cost of a same-day private flight on an Eclipse 500.

Ken Ross, founder and managing member of North American Jet Charter Group confirms that the Eclipse 500 allows his company to offer air travel at a very competitive price. He cites the aircraft’s safety record of, “the best of any light jet,” as one of the many reasons his charter operation utilizes this aircraft.

Ross adds that not only are they the most economical and efficient aircraft available, they are one of the greenest. “Most other twin-engine jets use 30 to 45 percent more fuel to travel the same distance,” he claims, “plus, the Eclipse 500 travels at faster speeds than some other twin-engine jets to deliver you to your destination sooner.” Less fuel consumption also translates to a reduction in carbon emissions. Another advantage, says Ross is that because the Eclipse 500 weighs less than 6000 lbs., it eliminates the excise tax associated with heavier jets. “Many other light jets weigh in excess of 10,000 lbs., which adds an excise tax to the transportation fee.”

“These jets are ideal for day business trips or weekend leisure trips,” Ross says, “and it could potentially be comparably priced to commercial flying.” For example, companies needing to fly four or five executives to a meeting in a more remote location can benefit greatly from using charter services. “A round trip flight from Chicago to New York for four people would take about 5½ hours of flying time and cost approximately $1,650 per hour,” he claims.

Because the Eclipse 500 needs less than 4000 feet for both takeoff and landing, there are more than 4000 airports that can accommodate it—which allows travelers to land closer to their final destination. 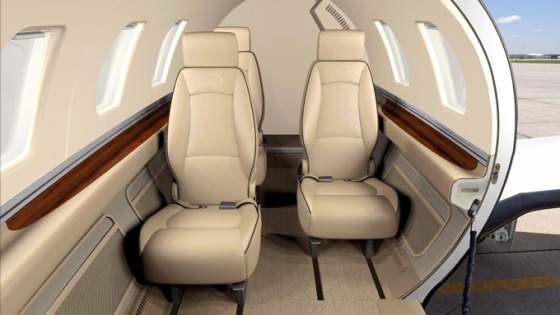 As with all private jet charter travel, the biggest savings travelers benefit from is time. Private charter travel allows passengers to arrive at the airport mere minutes before the scheduled flight time. If plans change or a person is running late, the flight will wait until he or she arrives before taking off. Because flyers do not have to wait in security lines at the airport, hours can be shaved off a trip. Also, while in flight, the privacy provided by this service allows team members to discuss sensitive issues without the worry of being overheard. The comfortable, ample seating allows passengers to relax during a flight.

Probably the only feature lacking on the Eclipse 500 is a lavatory. Thankfully, because this type of aircraft is reserved for shorter trips, this is usually not an issue with most flyers.

Read the related articles below for more information on aircraft charters.