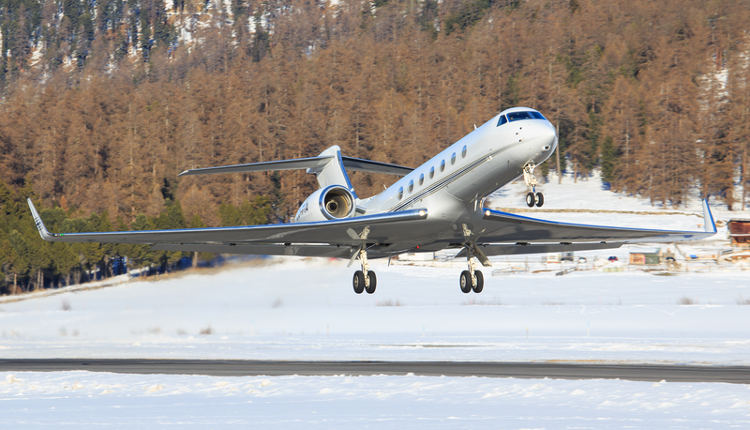 Depending on its configuration, the G550 can transport up to 19 passengers or can have sleeping for 8 people. There are options to have up to four distinct living areas, including a dedicated crew rest area, a private stateroom, conference area and entertainment space

The cabin has 14 Gulfstream signature oval windows, providing plenty of natural light along its 43 ft 11 in (13.39m) length, and the low-altitude cabin pressure helps to keep passengers refreshed during their journey. The cabin height is 6 ft 2 in and the width is 7 ft 4 in, while there is 170 cu ft (4.81 cu m) of baggage space. 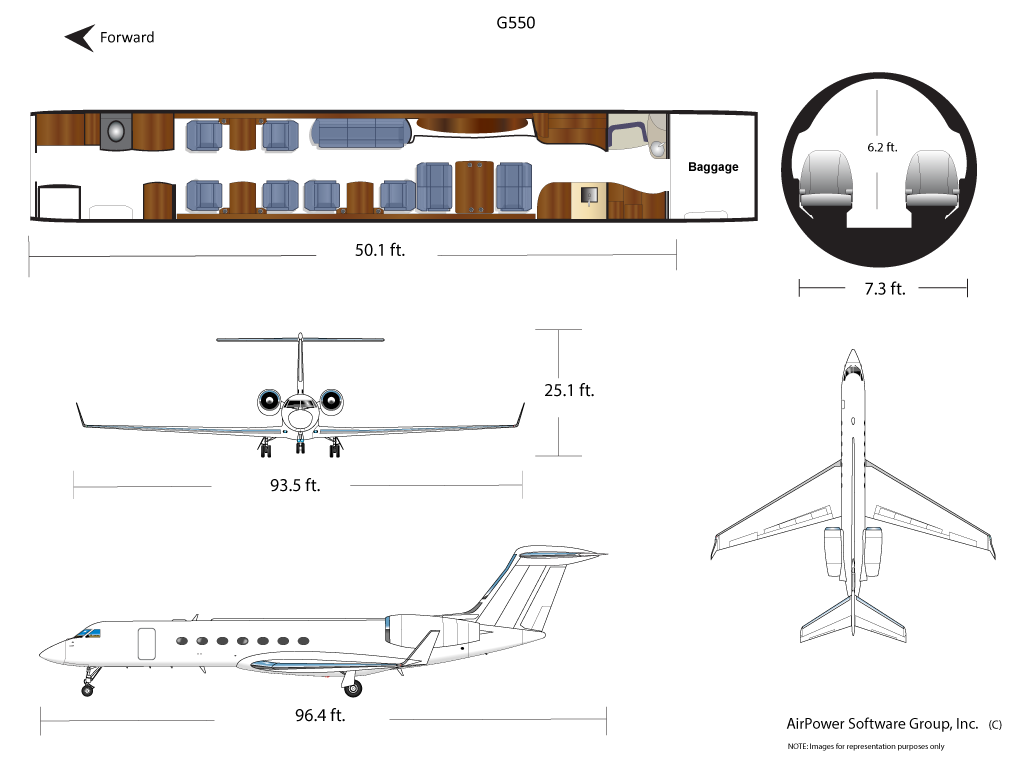 With a top speed of mach 0.885, and a high speed cruise of mach 0.85, the G550 has set more than 50 city-pair speed records. It can fly 6,750 nautical miles (12,501 kilometers) nonstop, meaning city pairs such as Shanghai to Los Angeles, New York to Dubai or London to Tokyo or to Los Angeles are all possible. An example range map is shown below, starting from Teterboro (TEB).

The plane is powered by two Rolls-Royce BR710 C4-11 engines, while the cockpit has a PlaneView flight deck with a Head-Up Display (HUD) and Enhanced Vision System (EVS) to improve the pilot's situational awareness. 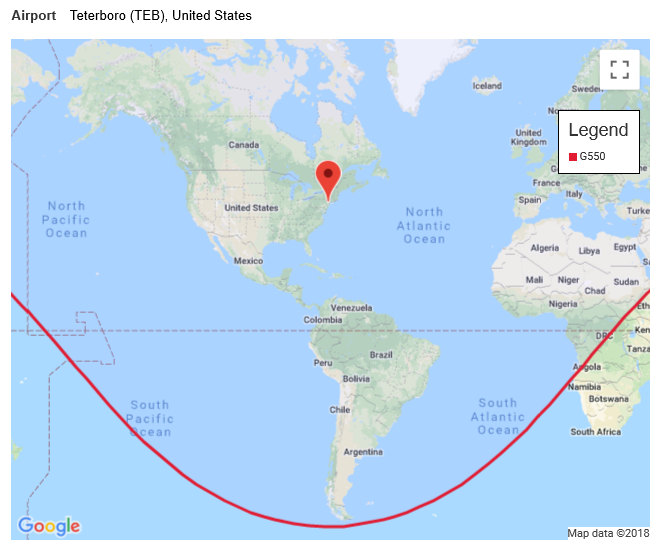 The list price of a new G550 is currently about $61.5m depending on the configuration, and it's worth negotiating for discounts from this list pricing. Average asking prices for one built in 2005-2006, is in the range $18m to $21m. Newer models that are 5 to 6 years old, 2012 to 2013 vintage, are typically in the range of $28m to $31m. Prices on preowned G550s vary depending on the total airframe and engine hours, maintenance, record keeping and overall condition.

The table below shows the "Direct Mission Costs" for typical missions of 1,000 nm, 3,000 nm and 6,000 nm. Of particular note, the fuel consumption varies significantly between take-off and cruise. On the other hand, longer missions require much more fuel on board, so take-off weight is much higher, requiring a higher fuel burn. The table includes a bundling of fuel consumed, maintenance labor, parts and reserve costs (Variable Costs), apportioned to the actual flight time for the mission length. The fuel price used for this analysis is based on an average price of $5.00 per gallon, and the flights are assumed to have 8 passengers and 4 crew. The fuel consumption figure accounts for taxi, takeoff, climb, cruise, descent, and landing.

These costs must be borne by a flight department irrespective of the level of aircraft utilization. Included in here are salaries for flight crew, annual training, hull insurance cost computed by multiplying a liability factor per $100 of hull insurance; and liability insurance based on $25m in coverage.

The other fixed costs are for cockpit subscription services, which consist of the following items.

These expenses are directly related to the operation of the aircraft and are represented as an hourly cost figure. Included are Fuel Expense, Maintenance Labor Expense, Parts Expense, Engine, Avionics and APU reserves expenses. The basis for the figures reported is actual operator experience compiled by AirPower Software. Parts, labor, and reserves are predicated on the assumption that the aircraft is no longer covered by the manufacturer’s warranty.

The fuel costs assume a price per gallon of $5.00 and an average fuel consumption of 358 gallons per hour.

There are two sets of additional costs that vary based on usage, these are the "Annual Cabin Services Cost", shown below.

And, the "Annual Trip Support Cost", which includes onboard catering, commercial flights for the flight crew, ground handling and landing/parking fees when the aircraft is away from its home airport.

Assuming that the aircraft is used for 400 hours per year, then the total annual costs of operation will be:

Note the above calculations do not include any figures for depreciation or for any financing charges, which may be a factor.

These numbers are courtesy of AirPower Software Group, Inc. Their tool, AircraftBudgetAnalyzer, lets you fully customize these operating costs to model your own usage and requirements.