Avinode, a company that provides charter quotes on more than 3,000 aircraft in their marketplace, has recently released data showing that charter jet rates are continuing to rise in the US and Canada.

According to Avinode, there have been steady charter rate increases for the past four years in both the US and Canada for all size jets. Avinode's Managing Director Oliver King, said "The U.S. has been in slow but constant recovery since 2009 while Europe has been struggling since the financial crisis". The graph below shows the upward trend in rates over the last couple of years for light, midsize and heavy jets. 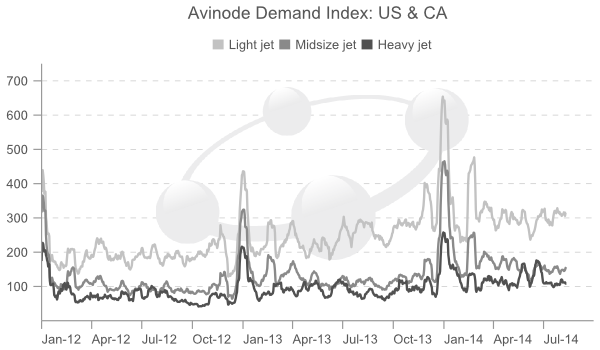 Looking at some specific aircraft: for the Learjet 60 you can see below that US and Canada rates have climbed steadily over the last 4 years. Rates in Europe for the Learjet 60 have been variable over this period, but appear to be on a recent upward trend. For other aircraft such as the Citation Mustang and Challenger 604, there's a similar trend, with North American rates steadily climbing, but European rates bouncing around and staying lower. This article on "Cost to Charter a Private Aircraft" has more specific prices and costs per hour, including a flight quote application.. 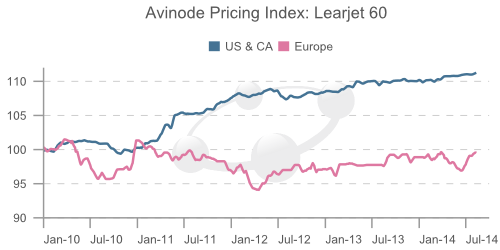 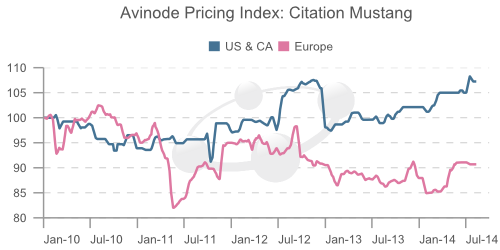 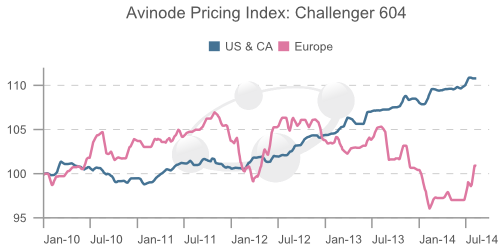 One major difference to note between US/Canada demand and European demand is the age of aircraft requested. King stated, "In Europe, 9% of requests are for aircraft older than 20 years, while that number is 41 % in the U.S. The average age of all requested aircraft is almost twice as high in the U.S. (18.2 years) compared to Europe (9.7 years). The U.S. fleet is older and buyers are used to flying older aircraft. If interiors are ok, these aircraft do the job and will most likely take you from A to B more cheaply even though you might lose 10 minutes on the trip". Charter operators and brokers can work with the consumer to find the appropriate aircraft to fit requirements.

Another interesting thing to note is that according to Avinode, the level of occupancy in these aircraft is only between 48% (for light jets) and 55% (for heavy jets) on average. Aircraft capacity does have a direct correlation with prices.

Regardless of the aircraft chosen, demand for private aircraft varies greatly throughout the year. As you can see in the top graph above the largest demand occurs during the Christmas holiday season, when requests for aircraft increase significantly. We recommended that you book well ahead for Christmas and other peak times in order to guarantee availability and get the best prices. This article has tips for peak travel times in private jets. Jet card holders also have to think ahead when planning their peak time travel since there may be additional fees or longer advance notice periods. Peak day travel in jet cards is covered here for some of the major card companies.