How Businesses Use Private Aviation

Every year, tens of thousands of companies use private aviation services, including private jets, turboprops and helicopters. While many may think that the typical passenger is a senior manager from a Fortune 500 company, the truth is, those travelers are actually in the minority of private aviation customers.

According to the 2014 NBAA Business Aviation Fact Book, only 22% of passengers on business aircraft are top management, compared to about 50% who are mid-level managers and 20% who are technical, sales, or service staff. In addition, only 3% of US business aircraft are flown by Fortune 500 companies. The rest are flown by the government, universities, and smaller businesses. The study showed that 59% of companies operating business aircraft have less than 500 employees, and about 70% have less than 1,000 employees. Most of these aircraft are small - the majority seat six passengers and fly less than 1,000 miles, according to the Fact Book.

So, why do these smaller business choose to fly private aircraft? The study showed many reasons, including saving employee time, increasing productivity, predictibility of schedule, and reaching more destinations. Many of these corporations are located in cities where commercial airlines have cut back or completely eliminated service. Being able to choose from ten times the number of airports (5,000 accessable to private aircraft versus 500 for commercial) is a major benefit. Only one in five private flights go to a large commercial airport - the remainder go to secondary airports, or airports with infrequent or no scheduled airline service. 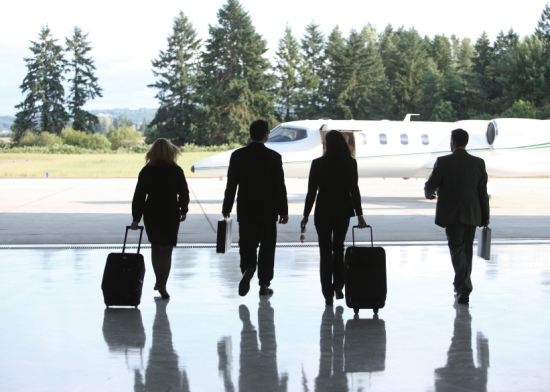 In addition to the convenience factor, the study showed that employees on board private aircraft are more productive than they are in the office or on commercial aircraft. Overall, 36% of time spent on board a private aircraft is spent on business meetings, compared to just 3% for commercial aircraft. But time and efficiency aren't the only reason businesses choose to fly private aircraft. The report references a study completed by the state of Idaho that showed that costs of ground transportation increase as the number of passengers increase. When three or more employees are traveling to the same destination, a private flight may be the most affordable option.

The report also showed other uses for private and business aircraft, including humanitarian missions. Since these aircraft are flexible and can land in many different locations, they are often the best option.

To learn more about the study, visit the NBAA website.