Some sure signs that the economy is starting to turn round are the growth in sales at Avantair. The company operates a fleet of Piaggio Avanti II aircraft and has both fractional owners and flight card owners. 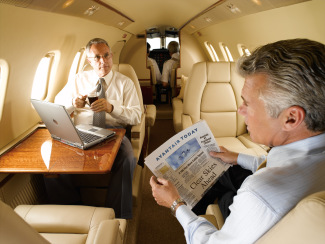 Avantairs flight hour time card program saw sales increasing 183% for a total of 82 cards for the three months ended March 31, 2010 over the comparable period in 2009.

Avantair's fractional share sales, while vastly under the levels experienced a year ago, are beginning to demonstrate signs of resurgence as they added five new fractional unit sales in the fiscal 2010 second quarter, up from two in the previous quarter. The renewal rate of their fractional owners remains extremely high at approximately 91%.

We also increased our fleet size to 55, with the addition of four new Piaggio Avanti II aircraft and the sale of one core aircraft. Given our larger fleet size, we are increasingly realizing economies of scale, enabling us to add new customers without incurring additional significant costs. With our foundation firmly in place, we are executing on a scalable model to service both our continued satisfied customers and new owners as we broaden our market presence and build our brand equity, Steven Santo Chief Executive Officer of Avantair,.

A recent report published by the research firm ARGUS showed that private aircraft flights in January 2010 increased by 5.3 percent over January 2009.

According to an AvData February 2010 report, Avantair has secured a market share of more than 29 percent of the fractional light jet cabin market, making Avantair the leader in that category.