Our annual summary report on the state of the business jet industry draws upon expertise from several key business insiders, including manufacturer Honeywell and analysts at JETNET iQ, with additional input from Aviation Week.

Before we look ahead, JETNET iQ Creator and Director Rollie Vincent offered some insights into the effects of the pandemic on 2020 markets:

In the first 9 months of 2020, the pre-owned and new aircraft segments have been on relatively different trajectories. While sales volumes in both segments are down year-overyear (YOY), pre-owned transactions have been less impacted than new aircraft deliveries so far.

Vincent went on to say that, “At this point in time, our outlook for 2021 shipments remains essentially flat year-over-year.” He notes that this is in sharp contrast to 2010, when “shipments dropped a further 15%... in the aftermath of the global financial crisis.”

The Next Ten Years

Industry forecasts predict between 6,584 and 7,404 new business jet deliveries over the next ten years, with a total dollar value of between $217.5bn and $236bn. JETNET iQ is offering the most conservative prediction, with 6,584 units. Meanwhile, Aviation Week’s forecast is of 7,404 new units, a drop from last year’s forecast of 8,200. Both units delivered and dollar value show a drop from last year’s forecasts. Aviation Week suggests that deliveries will show an 8% decline overall. Honeywell takes a more optimistic approach, citing a drop of only 4% compared to last year’s predictions.

In addition to COVID-19, there are several other factors that will influence the growth rate over the next few years. These include current uncertainty around the US election outcome, Brexit and uncertainty in the European markets, and an economic downturn in Latin America.

Heath Patrick, President, Americas Aftermarket, Honeywell Aerospace is optimistic that any drops in the market caused by COVID are strictly short-term:

Business jet usage is expected to rebound to 80% to 85% of 2019 levels in the 4th quarter of 2020 and fully rebound by the middle of 2021, indicating demand for business jet travel is returning after the global pandemic caused a slowdown in the industry earlier this year.

Honeywell’s findings show that 80% of the operators surveyed did not believe COVID would affect their future purchase plans. Those who did report changes to their plans said that it would be a reduction in new purchases for the short-term only. However, long term plans would not change. Overall, five-year purchase plans have dropped by less than 1%. Honeywell expects to see numbers begin their recovery as early as the second half of 2021. They predict that deliveries for 2021 will show an increase of 13% over 2020 numbers. For a longer-range outlook, Honeywell forecasts a 4-5% annual growth rate in deliveries through 2030, as the global economy recovers.

According to Patrick "The information we gleaned from operators shows a less than 1% decline in five-year purchase plans, so despite the short-term effects of the pandemic, we don't expect long-term changes to purchase plans or to the overall health of the business jet market." 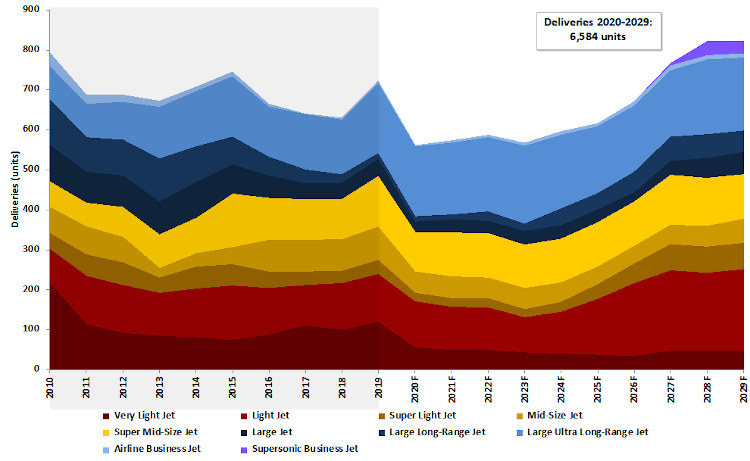 JETNET iQ added supersonic jets to its business jet sales forecast last year and predicts that demand for those will be a small but financially significant part of the market by 2030. Demand over the next ten years will continue to be led by large and ultra long-range jets, but light jets will still maintain a strong share of the overall market. This is reflected in 2020’s sales. Vincent notes that as of October 2020, “there have been 366 new business jet deliveries year-to-date (YTD), led by Gulfstream (79) and Textron Aviation (72).”

Much of the focus in the business jet market seems to be in the growing demand for larger and longer-range aircraft. However, despite claims similar to those made last year that interest in light jets is declining, smaller planes continue to make up an important part of the market in terms of units delivered. This of course is in contrast to their overall share of dollars, as shown in the JETNET iQ charts. Aviation Week even says that light jets will lead industry recovery efforts with a 28% share of the market. (Aviation Week also points to a strong market for turboprops with sales of a predicted 2,590 aircraft over the next ten years).

JETNET iQ expects that large ultra-long range jets will dominate the revenue share, accounting for 52.2% of dollar value. While Gulfstream and Cessna lead the market in terms of units delivered, the types of jets each company manufactures places Gulfstream and Bombardier in the financial lead, as shown in the chart below: 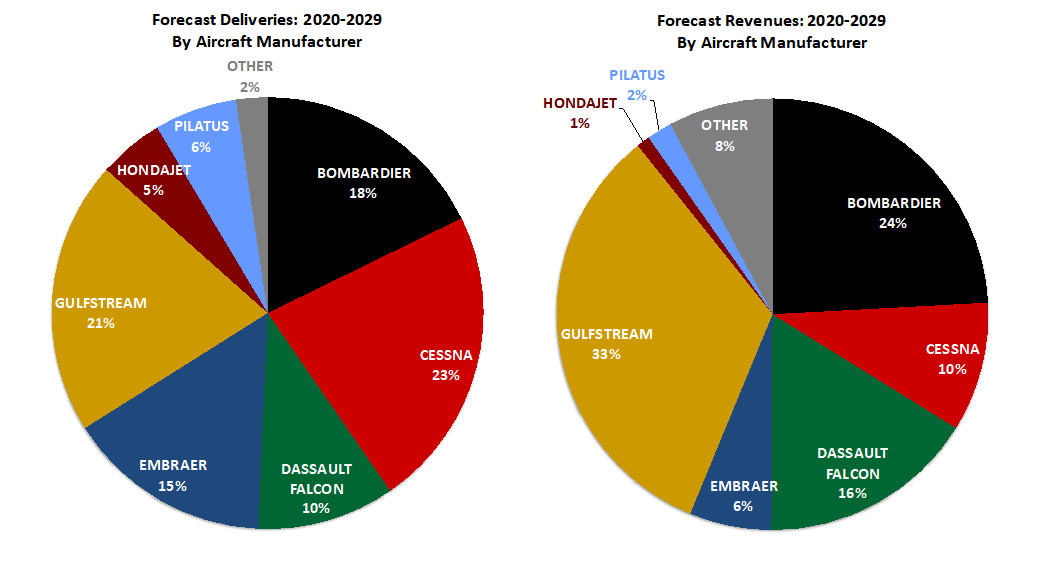 Likewise, Honeywell notes that operators remain focused on adding larger-cabin classes to their fleets. These are expected to account for more than 70% of all new business jet spending in the next five years.

Honeywell’s forecast takes a look at regional demand in the coming decade. They note that new jet acquisition plans in North America remain unchanged over last year’s forecast. North American operators will account for 64% of global demand for new aircraft, with 15% of the overall fleet likely to be replaced within the coming five years.

The European market has declined by about 4% since last year. Still accounting for 24% of the global fleet, the continent’s share is predicted to dip to 18% within five years. Also dipping is Latin America, where purchase plans have fallen by 6 percentage points. Honeywell points to economic pessimism in the region as contributing to a continued decline in purchases.

The Asia Pacific market remains stable, holding a 10% share of global new jet demand within the next five years. Lastly, the number of operators planning to replace or add to their fleets in the Middle East and Africa is up from 12% last year to 16% this year.

Impact on the Used-Aircraft Market

The pre-owned jet market has not been as heavily impacted by COVID as the new jet market. Vincent says, "Pre-owned business jet retail sales and lease transactions are down by only 8% YTD versus the same period last year, based on analysis of the latest JETNET records."

JETNET iQ notes that the outlook for the used sector remains unchanged through 2021. However, Honeywell figures states that used jet sales will drop over the next five years; 25% will be traded, down from 31% in last year’s forecast.

Consultants at Jetcraft forecast 10,183 pre-owned transactions representing $48.8B in revenue forecast over the next five years. Their forecast shows a drop to 1,617 units sold this year, worth $7.5bn, and then rising to reach 2,271 transactions worth $11.1bn annually by 2024.