With the latest jet sales forecasts released, it’s time for our annual summary of the state of the business jet industry. The articles compares the forecasts from Honeywell, Jetcraft and JETNET iQ.

Heath Patrick, president of America’s Aftermarket at Honeywell Aerospace, says that the short to medium-term future looks promising, with “a 7% increase in deliveries in 2020, following a strong projected growth in 2019 over 2018 aircraft deliveries.” He continues that these “new and innovative aircraft models will support solid growth in the short term” with an impact that will continue into long-term sales.

In the following annual report, we look at forecasts from several key industry insiders, including manufacturer Honeywell, brokers at Jetcraft, and analysts at JETNET iQ. Some figures from trade publication Aviation Week are also included.

According to industry forecasts, the next ten years will see between 7,254 and 8,200 new business jet deliveries, with a total dollar value ranging from $212bn and $248bn. Compared to last year’s projections, the new figures expect a rise in the number of overall units sold, but with a lower overall dollar value. JETNET iQ’s estimated number of units is the most conservative, at 7,254, while Aviation Week predicts as many as 8,200 units sold. Honeywell rests comfortably in the middle with a forecast of 7,600 units. Meanwhile, Jetcraft’s forecast covers the next five years. During that time, it predicts delivery of 3,444 units at a total revenue of $90.5bn.

A number of contributing factors to market growth are cited, as well as some that might lead to potential decline. Continued political and economic uncertainty surrounding Brexit is a factor in the European market. Geopolitical tensions and concerns about trade wars may affect sales in Asia and the Pacific, while political conflicts continue to play a part in the Middle Eastern and African markets. On the other hand, Aviation Week argues that recovering oil prices and the arrival of more efficient engines will lead to growth in the market. 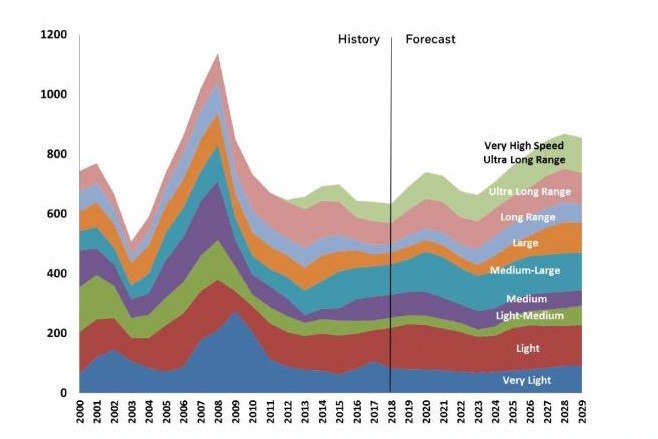 Honeywell’s projected sales may be down slightly compared to last year’s figures, but they predict a 7% increase in sales in 2020 and strong growth within the next five years. According to their forecast, sales over the next decade will equate to an annual growth of 2-3%. Initial sales are down slightly due to longer than expected certification times but the excitement about new long-range models will soon make up for that. 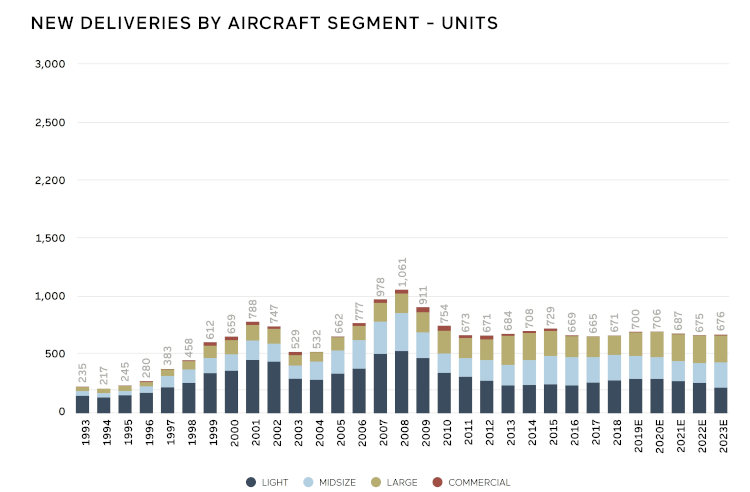 This year, Jetcraft has switched from a ten-year to a five-year forecast, something that they say is “more in line with the current aircraft ownership experience.” As per last year, they concur with Honeywell that there is a significant shift away from light jets and an increasing demand for larger, long-range models. However, whereas Honeywell suggests sustained growth, Jetcraft predicts that an economic downturn over the next few years will see a flattening of new unit sales. This will be paired with a rise in the pre-owned market. 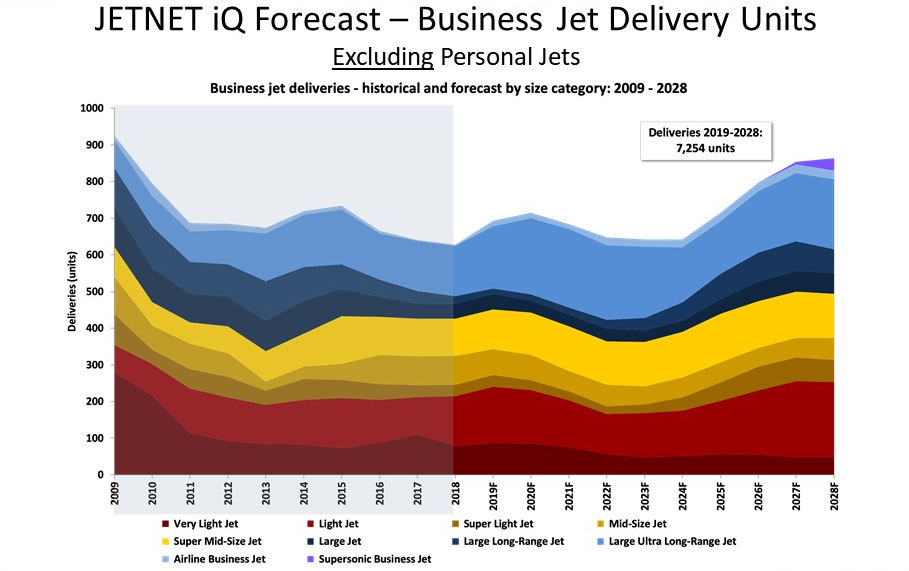 The JETNET iQ forecast is notable because it is the first to include supersonic jets in its business jet sales forecast; there are a few of these aircraft in development and JETNET are currently forecasting that they will enter the market in 2027. Demand for light jets and smaller aircraft continues to be on a par with that for large jets over the next decade in terms of units delivered. But in terms of revenue, light jets will account for just 8% of sales.

The general consensus is that the interest in light jets is declining. Instead, forecasts see a continued focus on larger cabin and longer-range aircraft. Even so, Honeywell’s estimate that 71% of all new sales revenue will be in these categories is a decrease from last year’s projection of 87%. According to Pascal Bachmann, senior vice-president of sales at Jetcraft, “Manufacturers are focusing more on producing aircraft in the midsize segment and above. This will result in lower unit deliveries but provide higher revenues.”

North America will retain its number one spot in the business jet market, accounting for an estimated 66% of all new deliveries within the next ten years. Europe holds on to a distant second place at about 13%. According to JETNET iQ, the Asia-Pacific region will see the fastest market growth (as much as 38%), followed by Europe (32%) and Africa/Middle-East (24%). However, even with such fast growth, by 2028 the North American fleet, at 17,396 jets, would still be 10 times the size of its Asian counterpart.

Economic instability continues to foster a conservative approach to both forecasts and buying decisions.

Impact of the Used-Aircraft Market

Jetcraft notes that the market for pre-owned aircraft continues to grow. In fact, it is growing more quickly than the rate of new unit deliveries, and will experience growth even as new unit sales may flatten somewhat. Several factors are behind this. Refurbishment of pre-owned aircraft is now more widely accessible and less expensive. Combined with historical depreciation rates, this makes purchasing a pre-owned model more attractive and cost-effective. Jetcraft predicts that by 2023, there will be four times more pre-owned transactions than there will be delivery of new units.