On the South Carolina coast, sandwiched between the Atlantic Ocean and the sweeping marshes of the mainland, lies the vacation paradise of Kiawah Island.

'Kiawah' (KEE-a-wah) was named in honor of the Indians who inhabited the island and its surrounding areas prior to colonization. The island's 10 miles of pristine, sun-swept beaches allow it to lay claim to being the resort community with the maximum beachfront on the Eastern Seaboard. With its lush, semi-tropical environment and top-of-the-line sports facilities, this resort community attracts nature lovers, sports enthusiasts and families alike.

Kiawah is perhaps best known for its acclaimed golf courses. The small barrier island also boasts 10,000 acres of natural woodlands, home to a range of fauna, including deer, osprey, great blue heron and loggerhead turtles. The island's Night Heron Park has 21 acres of playing fields, plus a pool complex, fitness trail and a variety of nature programs, including walking and paddling tours.

Best of all, Kiawah is just 21 miles south of historic Charleston, which offers 300 years of history and culture, besides opportunities to shop and dine in a world-class city.

Kiawah is a world-class golf destination with several of its spectacular golf courses designed by industry heavyweights. There's the Jack Nicklaus-designed Turtle Point, Tom Fazio's Osprey Point, Gary Player's Cougar Point, and Clyde Johnston's Oak Point. Most famous is the Pete Dye designed Ocean Course (which even non-golfers will recall seeing in Robert Redford's The Legend of Bagger Vance). True to its name, the Ocean Course offers panoramic ocean views from most holes. Kiawah has hosted a number of major golf events over the years, including the 1991 Ryder Cup and the 1997 and 2003 World Cup of Golf. The Ocean Course hosted the 2007 PGA Seniors and is all set to host the 2012 PGA championships.

Tennis Magazine has rated Kiawah as one of the top tennis resorts in the country. There are two state-of-the-art tennis centers here offering a range of teaching programs. Located at East Beach and West Beach, tennis buffs can try their skills on a variety of turfs-composition courts, hard or clay courts and lighted courts for playing by night.

The ocean around Kiawah teems with crab, blue marlin, tuna, shark and wahoo. Inshore, anglers can bait prized species like red drum, trout, flounder, shark and tarpon. For watersports enthusiasts there's water skiing and wakeboarding on the Trophy Lakes and kayaking on Bohicket Creek. The Bohicket Marina & Yacht Club, just outside Kiawah, provides access to the pristine waters of the Atlantic seaboard. Visitors can take in scenic water tours, private fishing charters, and a variety of boat and kayak rentals.

Bikes are the transport of choice on Kiawah, with 30 miles of paved biking trails and 10 miles of hard packed beach.

Just outside the Kiawah entry, Freshfields Village and Bohicket Marina Village offer a range of boutiques, restaurants and services, besides entertainment for the entire family. Shops in Kiawah are clustered around West Beach Village, selling everything from sportswear to handcrafted jewelry. Art aficionados and antique buffs can head to Charleston's numerous shopping districts and galleries.

Spoleto Festival & Piccolo Spoleto: Charleston is the home of this prestigious event held annually from late May through mid-June. Over 125 cultural performances transform the city into a vast theatre. Piccolo Spoleto features local and regional artists.

Southeastern Wildlife Exposition: Each February, Charleston hosts the most comprehensive wildlife art expo of its kind, with exhibits displayed throughout the city.

Spring Festival of Houses and Gardens: Here's your chance to peek into the interiors and gardens of over 150 of Charleston's private heritage residences, dating from the colonial era, through the Victorian years, to the early 20th century. The event takes place in March and April each year.

Fall Candlelight Tour of Homes & Gardens: A series of evening tours let you into some truly historic homes. Volunteer guides are stationed in each house or garden and the tours are self-guided and self-paced, with 8-10 sites included in each. The tours are sponsored by the Preservation Society and run annually in September and October. 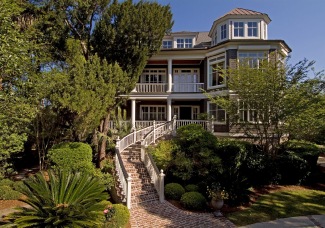 Where To Stay
Destination club homes

There are no private residence clubs on Kiawah, but several of the destination clubs have homes on the island.

The Lusso Collection Eugenia Avenue
Set in lush greenery in Kiawah's oldest and most established neighbourhood, the residence is only steps from the beach. Suitable for a large family or group, it features two master suites, two more suites, plus a guest retreat with two bedrooms. The large French doors open onto a pool deck and there are serene lagoon views.

Ultimate Resort Kiawah Island
With the golf course just behind, this beach house is only a few minutes' walk from the beach. The 3,500 sq. ft residence features four bedrooms (two of them ocean-facing) and four outdoor decks.

The Markers Club The Ryder Cup Residence
Named in honor of The Ryder Cup Matches, the residence hugs the 15th fairway of the Cougar Point golf course. With over 3,000 sq. ft of living space, the beautifully renovated four-bedroom home has all amenities, besides spectacular views of the course.

Private Escapes Broomsedge
With the Cougar Point golf course just behind and endless marshes and colorful estuaries further beyond, this traditional 2,400 sq. ft Cape Cod-style shingled beach house is as scenic as it gets.

Quintess 48 Ocean Course (image above right)
This award-winning 4,827 sq. ft Charleston style home features four bedrooms, elegant furnishings and a gourmet kitchen. But the piece de resistance has to be the wraparound veranda.

The Sanctuary Hotel
This 255 room and suite hotel is right on the ocean and was built in 2004, but was designed to feel as though it had been on Kiawah for centuries.

Charleston is a city bursting with museums, and its treasures include the Charleston Museum, America's oldest (founded 1773). The city has a vibrant arts scene with concerts and exhibitions featuring regularly on the calendar. Kiawah tends to get quiet after dark, so for a slice of the action you must head out to Charleston's happening bars and nightclubs.

Getting there
Kiawah Island is near Charleston, South Carolina. Charleston International Airport is 35 miles/45 minutes away. All major car rental companies are available as well as shuttle services if you have a reservation at Kiawah. The Charleston Executive Airport is a mere 9 miles/15 minutes from Kiawah and serves private aircraft.

www.kiawahconservancy.org/: A non-profit organization involved in nature conservation on Kiawah.

www.preservationsociety.org: Involved in the preservation of Charleston's historic heritage, they also offer tours.